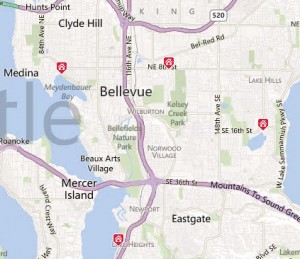 Four waterfront homes were sold in Bellevue last month, with a wide variety of waterfront locales. From $400,000 to $1.79 million, the neighborhoods and bodies of water that these homes reside upon and within made a great deal of difference in the real estate prices.

Wilburton:
Although we don't usually talk about a home on a creek as true waterfront, this home not far from Kelsey Creek Park has a large creek that requires bridges across the property. It's an interesting and significant feature, much more than your average trickling creek. The Wilburton home was bank-owned, and sold for $400,000 after almost 6 months on the market. It's a cosmetic fixer, built in the early 1980s and just over 3,000 square feet.

Phantom Lake:
A lesser-known lake in East Bellevue, Phantom Lake has some architecturally unique homes. From mid-centuries to 1970s homes, they often have the sweeping open rooms and rooflines of a modern home. The home sold on Phantom Lake last month closed at $807,500, just 2% off the original list price of $825,000. It had only been on the market for one month. The 4,000 square foot home was built in 1976 but feels much like a mix of 1970s and 1950s design.

Lake Washington:
Just south of Newport Shores, homes on Lakehurst Lane have great access to Lake Washington in a lesser-known and less-expensive location than other nearby neighborhoods on the lake. The home sold in February has 52 feet of lake frontage, an ample dock, and a nicely-remodeled 2,308 square foot home that was built in the 1970s. At $1.17 million, this is a fairly inexpensive Lake Washington home, and it was only on the market for three weeks. The final sale price was 13% below the original list price of $1.35 million.

Meydenbauer Bay:
At $1.79 million, the top waterfront Bellevue sale of the month was a house on Meydenbauer Bay, just off downtown Bellevue. The property had been marketed for 6 months, with a list price of $1.89 million, netting the buyers a 5% reduction in price. The value of this property was mostly in the waterfront land, with 50 feet of shoreline and a dock in place. The small, 1922-built home would likely be a rebuild for most waterfront home buyers.

Source: NWMLS Data - This information was not compiled or published by the Northwest Multiple Listing Service