Magnolia Homes For Sale in Seattle

Magnolia is located on a peninsula west of some of Seattle's busiest neighborhoods. It retains a small-town atmosphere, set off from the rest of the city by three bridges. Though famous for its expensive homes with sweeping Puget Sound views, it also boasts many more affordable homes in the interior of the peninsula. Magnolia has its own small retail core, and enjoys 360 degree views of the Seattle area from its many hillside homes.

If you were to look at a map, Magnolia in Seattle appears to have many parks and fields. Discovery Park (the largest public park with trail and beach), Commodore Park in W Commodore Way (a petite city park), Kiwanis Memorial Preserve Park in Brygger Dr W (a home to Seattle's nesting colony of great blue Herons), Lawton Park in 27th Ave W (it has picnic tables and a great view of Ballard), Magnolia Manor Park P-Patch in 28th Ave W (has garden, walking paths, benches, and picnic tables), Magnolia Water Tower Open Space in W Prosper St (has great views of downtown and Mount Rainier), Magnolia Playfield-North in 32nd Ave W (has soccer field, and lots of space for running and playing), Magnolia Playfield in 34th Ave W (has a nice playground, a baseball field, tennis courts, lots of parking areas, and it's near the coffee shops and restaurants), Bayview Playground in 24th Ave W (has basketball hoops, a kid's play area, and a baseball field), Ella Bailey Park in W Smith St (has picnic tables, barbeques, playground with play equipment, and walking pathways), Magnolia Park in Magnolia Blvd W (has great views of Puget Sound, walking pathways, a play area, and picnic sites), Magnolia Viewpoint in Magnolia Blvd W (it's great for sunset view, and has few benches and small parking lots),  W McGraw St - Shoreline Street End is a large beach with starfish in tide pools, and Parkmont Place in W Viewmont Way W (has benches and walking pathways).

Magnolia is the second largest neighborhood of Seattle, Washington by area. It occupies a hilly peninsula northwest of downtown. Magnolia has been a part of the city since 1891. A good portion of the peninsula is taken up by Discovery Park, formerly the U.S. Army's Fort Lawton. 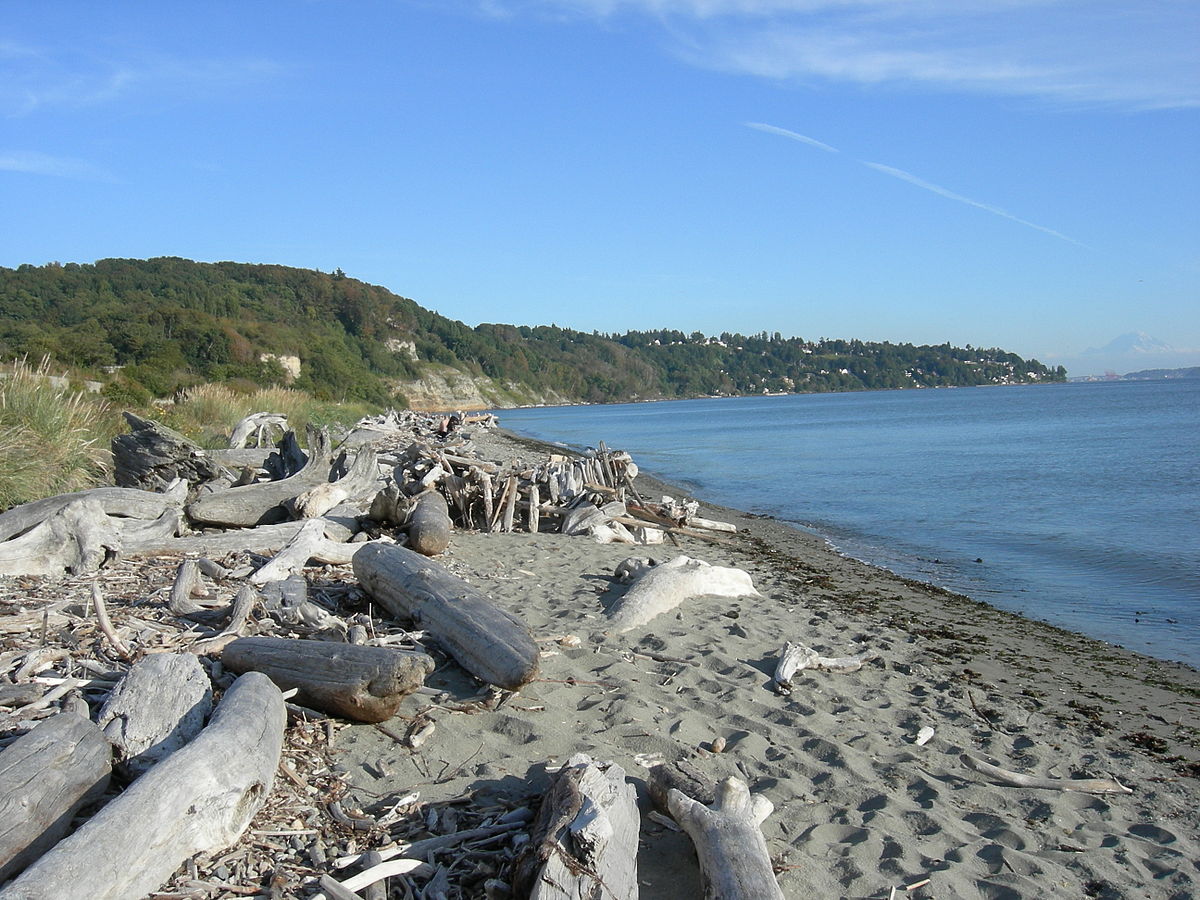 Looking roughly southeast from West Point along the south beach of Discovery Park, Seattle, Washington, USA. Beyond the beach are sand cliffs of the park itself, then houses further south on Magnolia. The body of water is the northwest corner of Elliott Bay, part of Puget Sound.

Magnolia is isolated from the rest of Seattle, connected by road to the rest of the city by only three bridges over the tracks of the BNSF Railway: W. Emerson Place in the north, W. Dravus Street in the center, and W. Garfield Street (the Magnolia Bridge) in the south — the Salmon Bay Bridge to Ballard is rail-only, no motorized traffic is permitted to cross the Hiram M. Chittenden Locks, and the W. Fort Street bridge over the railroad tracks only affords access to the W. Commodore Way industrial area (traffic to the rest of the city from that area still needs to take the W. Emerson Place bridge.)

Magnolia is bounded on the north by Salmon Bay and Shilshole Bay of the Lake Washington Ship Canal, across which is Ballard; on the west by Puget Sound and Elliott Bay; on the south by Elliott Bay and Smith Cove; and on the east by the BNSF Railway and the Port of Seattle's Terminal 91, beyond which is Interbay. 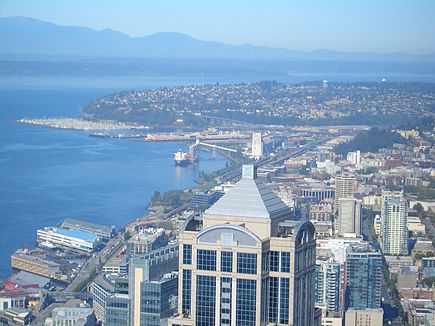 Although magnolia trees do line W. McGraw Street in the neighborhood's commercial district, Magnolia's naming was actually a misnomer. It was named by Captain George Davidson of the U.S. Coast Survey in 1856, who reportedly mistook the plentiful madrona trees for magnolias. Groups are actively working to save the remaining madronas on the bluff.

On Magnolia's south end is Magnolia Park, overlooking Puget Sound, Mount Rainier, and the city skyline. It features a picnic area and tennis courts across the street. Also in Magnolia are Smith Cove and its marina. Discovery Park, in the northwest, encompasses 534 acres (2.16 km2) and is Seattle's largest park. The park is home to eagles, herons, falcons, and beavers. Seven miles of trails provide visitors with a wilderness experience and views of Puget Sound and the Olympic Mountains. Parts of Fort Lawton, such as the officer's homes and other historic buildings, remain in the park. Discovery Park has extensive beaches wrapping around West Point, the westernmost point in Seattle, and West Point hosts a lighthouse which guides ships into Seattle's harbour, Elliott Bay.

Adjacent to Discovery Park is West Point, featuring the West Point Lighthouse, which was built in 1881 and is the oldest lighthouse in the area. Walking trails descend from the park to two miles (3 km) of beach and the lighthouse. West Point also contains one of Seattle's sewage treatment facilities, and several archaeological sites.

Another highlight is the local branch of the Seattle Public Library, designed in 1964 by architects Paul Hayden Kirk and Richard Haag, who won top awards for design from the American Library Association. In the children's section is a statue of a young girl titled "Girl Holding Doves," designed by Ebba Rapp McLauchlan. Outside hangs a bronze wall sculpture titled "Activity of Thought," an abstract piece of art designed especially for the library by Glenn Alps. The library is furnished with solid walnut tables and chairs custom designed by George Nakashima.

Magnolia's business district, called "the Village" by locals, is home to many specialty stores and professional services, some of Seattle's top restaurants, and industrial and marine services. In the summer, there is a farmers market held on Saturdays in the Magnolia Village.

Our Magnolia market research helps you make more informed decisions about homes in Central Seattle. Each week we publish market updates for Magnolia, in its 98112 zip code. You can see the latest trends in pricing, affordability, supply and demand. We invest in this research so our clients always have the latest insights to make the best decisions with confidence.