Waterfront homes make up a large percentage of the luxury real estate in Greater Seattle. Montlake and other neighborhoods in Central Seattle will often have waterfront homes available in a variety of locations. Seattle waterfront properties include luxury lakefront homes on Lake Washington, Puget Sound waterfront estates, and floating homes and houseboats on Lake Union.

If there are no waterfront homes available today in Montlake, check back daily for new listings.
If you'd like us to do the searching for you, just Contact Us with your home preferences.

The Montlake neighborhood, wedged between Capitol Hill and the University District, draws its urban feel from the waterway that cuts through it. Crafstman-style homes and historic Tudor houses dominate the area and lend a placid air to the Montlake Cut, a part of the ship-bearing canal between Puget Sound and Lake Washington. Montlake residents regularly walk across the Montlake Bridge to attend Washington Huskies football and basketball games on the weekends.

Montlake is an affluent residential neighborhood in central Seattle with median household income close to $200,000. It is bounded to the north by Portage Bay and the Montlake Cut section of the Lake Washington Ship Canal, to the east by the Washington Park Arboretum, and to the south and west by Interlaken Park. Capitol Hill is on its south and west sides, and the University of Washington lies across the Montlake Cut to the north. State Route 520 runs through the northern tip of Montlake, isolating four blocks from the rest of the neighborhood.

Though sports at the University of Washington are referred to metonymically as "Montlake," UW sports facilities are not located within the traditional bounds of the neighborhood; instead, they are located on Montlake Boulevard N.E., across the Montlake Cut from the neighborhood. 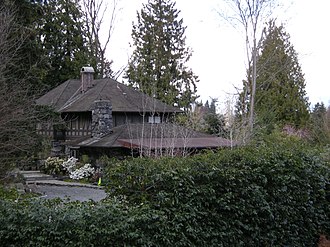 Montlake was primarily developed by John E. Boyer and Herbert Turner (also known as H.S. Turner) from 1903 through the early 1930s. In 1916, the northern boundary of Montlake was fixed by the opening of the New Portage Canal, later known as the Montlake Cut, between Lake Washington and Lake Union. The Montlake Bridge, a distinctive bascule bridge crossing the Montlake Cut, opened in 1925.

In 1925, a Montlake neighbor made a low offer for a tiny slice of adjoining land. Out of spite for the low offer, the builder built an 860-square-foot (80 m2) house at 2022 24th Avenue E. that blocked the neighbors' open space. The house is 55 inches (1.4 m) wide at the south end and 15 feet (4.6 m) wide at the north end. The Montlake Spite House still is standing and occupied.

Montlake has one church, the Greek Orthodox St. Demetrios, built in 1963 on the grounds of a former garden business called Dahlialand. Montlake was once the home of the Museum of History and Industry (1952) and is currently the home of the Seattle Yacht Club (1920) and the Northwest Fisheries Science Center (1931), part of the National Marine Fisheries Service. 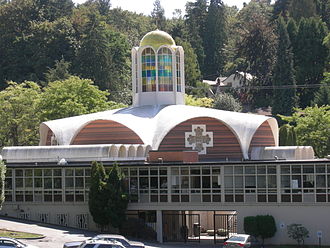 The Montlake Community Club, an organization of neighborhood residents, has a distinguished history of grassroots activism. (Critics have called it NIMBY-ism. Montlake first became politically active in a failed battle to move or avoid building State Route 520 through the northern section of the neighborhood and the arboretum. The neighborhood's efforts were unsuccessful and SR 520 was opened in 1963.

A more politically savvy Montlake Community Club helped to end the R.H. Thomson expressway project of the 1960s. The original plan was to run a second north-south freeway through the city, parallel to Interstate 5 but cutting through the heart of Ravenna, Montlake, Madison Valley, and the Central District, taking out the western section of the Arboretum in the process. It was designed as a bypass around Downtown for through traffic. Interchanges with State Route 520 and I-90 were planned and the 520 interchange was partially built, but the project was halted before construction went further. Never-used on- and off-ramps still stand at the north end of the Arboretum as a reminder.

Members of the Montlake community continue to negotiate with state and local officials over planned improvements to SR 520 and other local roads. Recently, a neighborhood group called Better Bridge endorsed a proposal to expand SR 520 to six lanes, move it north, and build a lid over the existing 520 freeway to reconnect the Shelby and Hamlin blocks to the rest of the neighborhood. The proposal has been endorsed by some members of Seattle City Council but has not yet been formally approved.

Montlake saw a spike in housing prices and the demolition or renovation of several smaller homes starting in the late 1980s, as new residents bought up properties in the neighborhood because of its charm, good schools, and central location. 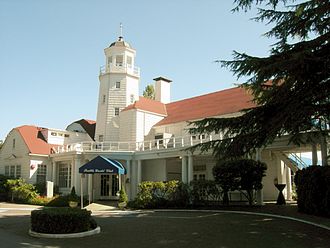 The Seattle Yacht Club in the Montlake neighborhood is on the National Register of Historic Places.

Our exclusive Local Market Research helps you make more informed decisions. Each week we publish market updates for Montlake. You can see the latest trends in pricing, affordability, supply and demand. We invest in this research so our clients always have the latest insights to make the best decisions with confidence. Below are the latest home pricing trends for Montlake based on zip code 98112.