Gig Harbor is a city near Tacoma, WA that is named for the body of water which it surrounds. Seattle-area residents often travel through Gig Harbor on the way to the Olympia peninsula, as it is located just across the main thoroughfare over Puget Sound, the Tacoma Narrows Bridge. Gig Harbor is well known for its shopping, dining, and entertainment, as its beautiful waterfront location and downtown shopping district attract visitors from all over the Northwest.

Gig Harbor has an approximate population of 9,000 and is part of Pierce County. One of the tourist attractions in the city is Skansie Brothers Park and Netshed in 3211 Harborview Dr in the middle of the harbor. It's a small park that hosts a farmers market during summertime and concerts, and it has a public dock, picnic areas, historical exhibits, and nautical antiques. To know more about the local history of Gig Harbor, check out the Harbor History Museum at 4121 Harborview Dr.

Gig Harbor has City Park at Crescent Creek at 3303 Vernhardson St. It's a creekfront park with picnic sites, a playground for kids, and tennis courts.  Cushman Trail is perfect for bikers, hikers, and joggers due to its uphill and downhill paths, drinking water fountains, and restrooms. Visitors and residents in Gig Harbor are comfortable watching movies in their favorite theatre named Galaxy Theatres Gig Harbor IMAX at 4649 Point Fosdick Dr.

Gig Harbor has many shops and restaurants on both the north and south sides of the city. The department stores available are Target, Costco Wholesale, Marshalls, HomeGoods, and Kohls. If you want to dine in a waterfront restaurant, check out NetShed # 9 at 3313 Harborview Dr, or visit Tides Tavern at 2925 Harborview Dr.

Our exclusive Local Market Research helps you make more informed decisions. Each week we publish market updates for Gig Harbor. You can see the latest trends in pricing, affordability, supply and demand. We invest in this research so our clients always have the latest insights to make the best decisions with confidence. Below are the latest home pricing trends for Gig Harbor based on zip code 98335. 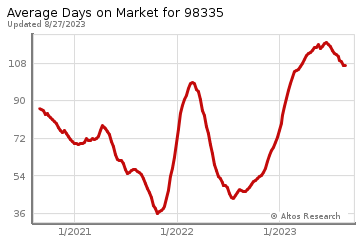 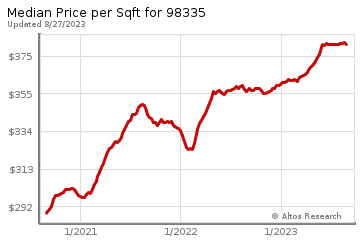