Kent is a city in South King County that covers 28 square miles of land. With a population of 118,000, Kent's residents are spread across the neighborhoods of East Hill, the Valley, and West Hill. While mostly residential and rural, Kent has a revitalized retail core at Kent Station, and a fair amount of warehousing business. Oberto Sausage company and REI have corporate headquarters in Kent.

Kent is a city located in King County, Washington, United States. The sixth largest city in the state, Kent is in the heart of the Seattle–Tacoma metropolitan area. Kent is connected to Seattle, Bellevue and Tacoma via two freeways, numerous city streets, Sounder commuter rail, and - coming in 2024 - Link light rail. Incorporated in 1890, it is the second oldest incorporated city in King County, after Seattle. Kent's population as of April 2010 was 92,411 according to the 2010 census. Annexation in July 1, 2010 increased the population by 11,000  Kent is generally divided into 3 sections: West Hill (mixed residential and commercial along Interstate 5), Valley (primarily industrial and commercial with some medium density residential; significant parkland along Green River), and East Hill (primarily residential with retail). 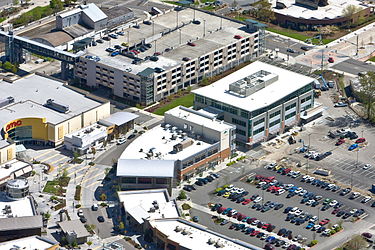 The Kent area was first permanently settled by European Americans in the 1850s along the banks of what was then the White River. The first settler was Samuel Russell, who sailed the White and Duwamish rivers until he claimed a plot of land southeast of modern-day downtown Kent in the spring of 1853. Russell was followed by several other settlers who quickly staked claims around the area. The settlements were originally known as "White River" and later the town was called "Titusville" after an early settler by the name of James Henry Titus. (There is still a "Titusville Station" sign on Gowe Street near First Avenue). In 1861 a post office was established under the name White River and was located at the farm of David and Irena Neely who settled in modern-day Kent in 1854. In 1855 their farm was attacked by Native Americans when David Neely served as a lieutenant in the Territorial Army. Another settler was Henry L. Yesler, who was the first sawmill operator in Seattle. By 1870 the population was 277 and all of the quality bottom-land had been claimed.

Throughout the 1860s and 70's, grain and forage crops such as wheat, barley, oats, hay, and timothy accounted for much of the annual return of farmers in the valley. During the late 1870s the town discovered hops production as a major source of income. Due to an aphid invasion which affected hops crops in Europe, hops from the Puget Sound area began to command high prices. Hops were shipped from Titusville either by the river or via rail. In 1889 the town was renamed for the County of Kent, the major hops-producing region in England. Ezra Meeker was asked by the Northern Pacific Railroad to name its station. Meeker suggested that it be known as Kent as it was "Hop Capitol of the West". Hops production in the White River valley came to an end soon after its own invasion of aphids in 1891.

Kent was officially incorporated on May 28, 1890, with a population of 793, the second city incorporated in King County. Seattle was the first.

After the turn of the 20th century the area turned to dairy farming and was home to a Carnation condensed milk plant. Flooding from both the Green and the White Rivers was a constant problem. In 1906, flooding changed the course of the White River, which reduced the flood hazard by half. The Green River continued to present problems until the creation of the Howard A. Hanson Dam at Eagle Gorge in 1962.

During and after the Great Depression, Kent was known as the "Lettuce Capital of the World". After WWII, Kent began to grow more rapidly. From 1953 to 1960 the city's size grew twelve-fold. In 1965 Boeing began building in Kent, followed a few years later by other aerospace and high-tech companies.

Kent is divided into three major regions: East Hill, the Valley, and West Hill. Downtown Kent is located on the east side of the valley; the rest of the valley is almost entirely covered by warehouses. Mt. Rainier is a prominent geographical landmark to the southeast.

Nearby cities include Renton and Tukwila to the north, Covington and Maple Valley to the east, Auburn to the south, and Federal Way, Des Moines and SeaTac to the west.

There are several major freeways and highways in or near Kent, including Interstate 5, State Route 167, State Route 516, State Route 18, and State Route 99, which produce high traffic density during rush hour. Kent is also central to King County Metro transit, with the Kent Station providing service to many destinations, including downtown Seattle by multiple commuter buses, the Sounder Commuter Rail, and local bus service. Heavy rail service includes two major north–south lines through the Kent Valley, with freight traffic operations by the BNSF and Union Pacific railroads. 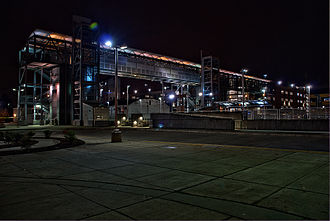 Kent Station during the night

Kent's park system includes 73 parks, miniparks, playfields, skateparks, greenbelts, and other related facilities. These parks range in size from as little as 4,300 square feet (400 m2) to over 310 acres (1.3 km2).

The city maintains its own municipal police department. 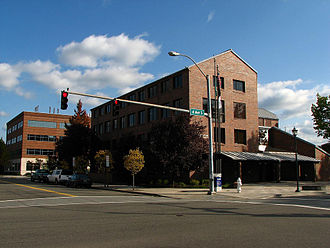 Public primary and secondary education in Kent and a number of neighboring cities and unincorporated areas is governed by the Kent School District. The district includes four high schools, seven middle schools, twenty-eight elementary schools and two academies. Federal Way Public Schools also has several schools within the city limits. Residents of far east Kent are zoned in the Tahoma School district. A branch of Green River Community College opened in Kent Station in 2007. The Kent School District also has an individualized graduation and degree program named iGrad. The program is aimed at dropouts aged 16–21 who are willing to get back to school.

In keeping with the King County Annexation Initiative, which seeks to annex large urban unincorporated areas into city limits or incorporate new cities out of those areas, the Panther Lake area (known officially as the Kent Northeast Potential Annexation Area) was proposed for annexation to the city of Kent. The annexation was voted on by residents of the potential annexation area on November 3, 2009; the area was officially annexed July 1, 2010. The city grew in area by approximately 5 square miles (13 km2) and 24,000 residents. 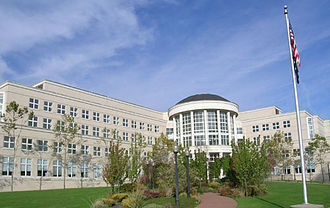 In addition to REI, Oberto Sausage Company, and Seattle Bicycle Supply (owner of Redline Bicycles) all being headquartered in Kent, both Amazon and Boeing operate facilities in the city. Kent also hosts many warehouses, due in part to its proximity to key transportation routes. It is also home to the two largest waterjet companies in the United States: Flow International Corporation and Omax Corporation, as well as aerospace manufacturer Blue Origin. The warehouse district has grown rapidly in recent years. Whirlpool Corporation and General Electric Appliances are two companies with regional distribution centers in Kent.

To honor the 100th anniversary of Oberto Sausage Company's presence in the city, Kent designated a section of South 238th Street as Oberto Drive in May 2018.

Kent is home to the fourth largest manufacturing and distribution area in the United States.

Boeing Kent Space Center was opened with a public dedication ceremony on October 24, 1964. Keynote speakers at the event were William "Bill" Allen, Chairman and CEO of The Boeing Company; future Washington Governor Dan Evans; and Alex Thorton, Mayor of the City of Kent. The event featured public tours of the labs and facilities that were used to build the lunar rovers used in the Apollo program.

Kent is home to a large steel industry dating back to the early 20th century. Steel and metal manufacturers include:

Salmon Bay Steel Company: Operated in Kent for 50 years before closing down. Birmingham Steel purchased Salmon bay in 1991. Salmon bay went on to buy Bethlehem Steel (Seattle Steel) in West Seattle. Years after the purchase, complaints were made of pollution in the Green River valley about pollution from the Salmon Bay melting facility and the facility was shut down.

Pacific Metal Company: In 1947, started in Seattle and opened a 19,000 square foot plant. The business and facilities continued to grow for 30 years to meet local needs as well as the emerging markets of Alaska. The "expanded" 40,000 square foot warehouse and sales office was bursting its seams.. In 1979, an 80,000 square foot facility was built south of the city of Seattle in the Kent Valley at Tukwila. In September 2010 PMC moved to a new location just 3 miles SE in the city of Kent, Washington. Pacific Metal Company is a stocking distributor of non-ferrous metals specializing in stainless steel, copper, aluminum, and brass products as well as ferrous products specializing in Cold Rolled, Coated (Zinc and Aluminum) and pre-painted coils and sheets.

According to the City's 2018 Comprehensive Annual Financial Report, the largest employers in the city are: 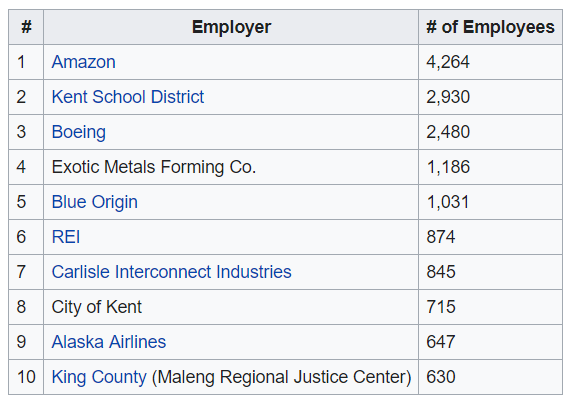 In 2003, Kent was named Sports Illustrated's Sportstown of the year for Washington. In January 2006, an entertainment center, known as Kent Station, opened in downtown Kent adjacent to the transit station of the same name.

The 2012 Skate America figure skating competition was held in Kent from October 19 to 21, 2012, at ShoWare Center.

Riverbend Golf Complex, featuring an 18-hole course which is one of the busiest in Washington state, is located in Kent. An adjacent par 3 course was actively used by locals for years before being shut down in 2017 to make room for a mixed used development.

The people of Kent are also often fans of the Seattle Seahawks an NFL team, the Seattle Sounders FC, a MLS team, and the Seattle Mariners, an MLB team. They could also be counted as fans of the former NBA team the Seattle SuperSonics which was based in the nearby city of Seattle.

Our exclusive Local Market Research helps you make more informed decisions. Each week we publish market updates for Kent. You can see the latest trends in pricing, affordability, supply and demand. We invest in this research so our clients always have the latest insights to make the best decisions with confidence. Below are the latest home pricing trends for Kent based on zip code 98032. 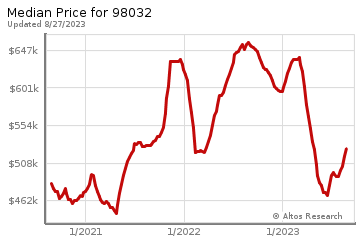 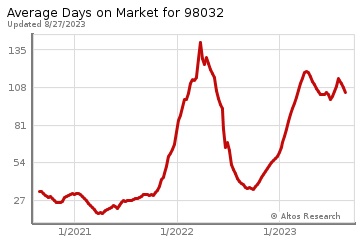 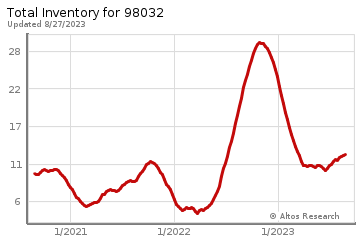 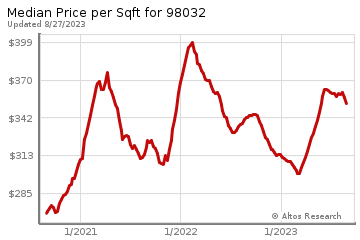