Maple Valley is a city in King County, Washington, United States. The population was 22,684 at the 2010 census, and is estimated to be 27,202 as of 2019. The city functions as a commuter town for residents, though there is an increasing amount of commercial activity in the area.

The area was settled in 1879 by three men who were improving a trail and brought their families in. When a name for a future community was proposed, the names Vine Maple Valley and Maple Ridge were suggested. A vote was taken by writing the names on slips of paper and placing them in a hat. Vine Maple Valley won by 2/3, but the word "Vine" was later cut by the post office because it made the name too long.

The town's early history mainly had to do with coal, lumber milling to build homes, and a railroad that ran through town. Coal was brought in from Black Diamond to the south, but the town itself also mined coal from Cedar Mountain. The mine was used as late as 1947. Rail workers for lines like the Northern Pacific Railroad and the Cedar River Watershed, closed off by the City of Seattle, meant more workers for those things. More residents meant more lumber milling. More lumber milling meant more workers. Suquamish tribe chairperson Martha George was born near Maple Valley in Sheridan in 1892, at a logging camp where her mother and grandmother worked as cooks."

The town grew inward. Blacksmith shops, hotels, saloons and stores took up the town in the 1910s and 1920s. Schools went up as well. Early schools were shacks at best. A two-room school went up in 1910, and a larger high school was built in 1929 as the first school in the Tahoma School District. The school, after extensive renovations, still stands today as an elementary school. Much of this early development actually did not take place in the modern-day city, but rather in Hobart, northeast of incorporated Maple Valley.

More residents meant farming and fishing became staples in the area, with milk, poultry and berry farming becoming the main grown food staples in the area. Fishing out of the Cedar River also became popular. Maple Valley also saw resorts beginning in the 1920s. Lake Wilderness, once the site of a county lumber mill, quickly became a resort lake with the opening of Gaffney's Grove, which opened with a ballroom, restaurant and roller rink. Later, the resort grew to include an airstrip, lodge, rental cabins, a nine-hole golf course and a bowling alley. It remained in operation until 1964.

Increasing automobile use in the area gave rise to new roads being built. In the early 1960s, the construction of State Route 18 between Auburn and North Bend ran through the city, requiring many landmarks to be either demolished or moved. The Maple Valley Historical Society keeps records on the city's past, with two historical museums holding artifacts such as the city's first fire engine and photographs of old places in and around the city like Gaffney's Grove. 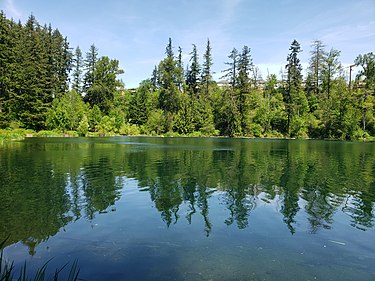 The city of Maple Valley was officially incorporated on August 31, 1997. The Green to Cedar River trail runs through the city, along SR 169 and Witte Road while passing through the former Gaffney's Grove site, now the Lake Wilderness City Park. The park includes a swimming beach and sprawling grass fields, and sees the annual Maple Valley Days Parade each year in June. The Lake Wilderness Arboretum is also located here.

Due to the urban growth boundaries of King County, the city is uniquely split into different sectors along Maple Valley Highway (SR 169), the main thoroughfare through the city. At the northern and southern boundaries of the city lie two large commercial areas, while central Maple Valley is predominantly residential.

The south side's Four Corners district is the main commercial area of the city. It is located along Maple Valley Highway and is bisected by Kent-Kangley Road (SR 516) to create four distinct areas of development. The northwestern corner underwent massive reconstruction in the early 2010s and now features several large retailers, apartments, and a strip mall. The northeastern corner was completely constructed in the 2010s; it formerly was a large lumberyard and is now home to several retailers.The southern corners feature strip malls, retailers, an apartment complex, and a housing development.

The city is entirely served by the Tahoma School District, which at one point had its high school in neighboring Covington. In 2015, a bond measure was passed to build a new and more centralized high school for the district. It was to be built in a small unincorporated area southeast of Four Corners that was completely surrounded by Maple Valley, known informally as the ‘Donut Hole’. The area was annexed into Maple Valley and the new three-story Tahoma High School was completed in 2017.

The main bodies of water in the city limits are Lake Wilderness, Lake Lucerne, Rock Creek, and part of Pipe Lake. The Cedar River passes through unincorporated King County very near the northeastern border of the city. The city is bordered by Hobart, Fairwood, and Ravensdale, two unincorporated King County census-designated places, along with the cities of Renton, Kent, and Black Diamond.

The entirety of Maple Valley is served by the Tahoma School District. There is one high school, two middle schools, and six elementary schools. The district operates its transportation facility adjacent to SR 18 on Petrovitsky near city limits. The Central Services building is located next to Rock Creek Elementary School.

Most of the district's schools are located within the city, with a few exceptions: