Water View homes make up a large percentage of the luxury real estate in Greater Seattle.  North Bend and other nearby cities will often have water view homes available in a variety of locations. Seattle-area water view properties include luxury lakefront homes on Lake Washington, Puget Sound water view estates, and floating homes and houseboats on Lake Union.

North Bend is a city in East King County with a population of 6,000. Famous as the location for the television series "Twin Peaks", the town was formerly centered on employment from the Weyerhauser saw mill but has become more upscale in recent years. Nintendo's main North American production facility is located in North Bend, creating stable employment for the city.

North Bend is a city in King County, Washington, United States, on the outskirts of the Seattle metropolitan area. The population was 5,731 at the 2010 census and an estimated 7,136 in 2018.

Since the closure of Weyerhaeuser's Snoqualmie sawmill, North Bend has become a prosperous bedroom community for Seattle, located about 30 miles (48 km) to the west. The town was made famous by David Lynch's television series Twin Peaks, which was partially filmed in North Bend. The community is also home to Nintendo North Bend, the main North American production facility and distribution center for the video game console manufacturer Nintendo. 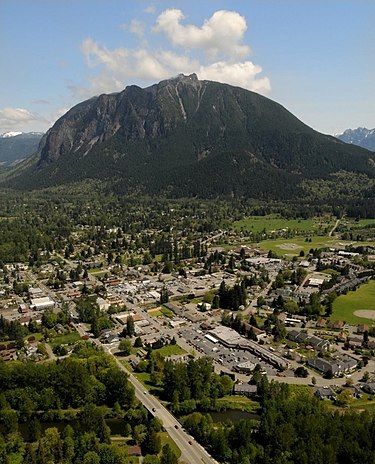 The Snoqualmie Indian Tribe has resided in the Snoqualmie Prairie, including the area now known as North Bend, for thousands of years. This prairie southeast of Snoqualmie Falls was the ancestral home, hunting and forage grounds for the Snoqualmie people and was located in the upper Snoqualmie Valley near the Snoqualmie River fork confluence, Mount Si, and the western foothills of the Cascade Range. 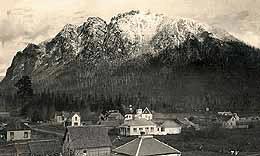 One of the first explorers to the upper Snoqualmie Valley was Samuel Hancock who arrived in 1851. Hancock traveled upriver with his Snoqualmie guides, fording canoes around the falls to reach Snoqualmie Prairie, searching for coal deposits. He was taken to a "very extensive and fertile prairie" about two miles above Snoqualmie Falls. The beautiful open grassland came to be known as the Snoqualmie Prairie, the heart of which is now known as Tollgate and Meadowbrook farms. The Snoqualmies, led by Chief Patkanim, later sided with early settlers in the 1850s Indian Wars and were one of the signatory tribes of the Treaty of Point Elliott in 1855, which failed to designate an Indian reservation for the Snoqualmies. Some of the soldiers in those wars, such as the brothers and sisters Kellogg, established cabins near remaining Snoqualmie blockhouses; however, the first permanent American resident in the valley was Jeremiah Borst, who arrived in 1858. 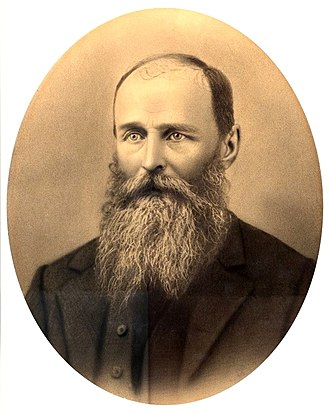 After the Homestead Act of 1862, more settlers ventured to the Snoqualmie Valley, with the first families settling near Borst on the easterly end of Snoqualmie Prairie. In 1865, Matts Peterson homesteaded the site that ultimately became North Bend. In 1879, Peterson sold the property to Borst and moved east of the Cascades. Borst wrote to Will Taylor, who had left the Pacific Northwest to pursue mining in California, and offered him the Peterson homestead in exchange for labor. Taylor returned and became the driving force in developing the town while expanding his property to include a thriving trading post and boarding house for travelers over Snoqualmie Pass. On February 16, 1889, with the upcoming railroad boom, Taylor formally platted a town including his farm, upcoming street plans and building lots, giving it the name "Snoqualmie". Later that summer, competing Seattle land speculators subsequently platted nearby "Snoqualmie Falls", choosing a similar name. Pressured by demands of the Seattle, Lake Shore and Eastern Railway to avoid confusion, Taylor reluctantly renamed his town "Mountain View". However, the U.S. Post Office Department objected to "Mountain View", as a town with that name already existed in northern Whatcom County. To conclude the matter Taylor agreed to permanently rename the community "North Bend", after its prime location near the large northward bend of the South and Middle Fork of the Snoqualmie River. Taylor was proud of his new, thriving town, but by historical accounts, "He never got over having his town name taken away." North Bend was officially incorporated on March 12, 1909, and grew throughout the 20th century, with an early economic focus on logging, sawmill production, agricultural and dairy farming. 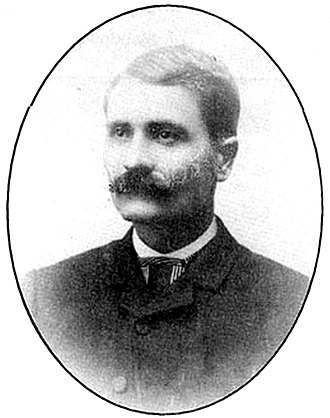 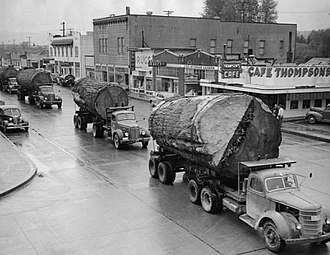 North Bend is located in the foothills of the Cascade Range, 30 miles (48 km) east of Seattle in the upper valley of the Snoqualmie River. The city is bordered to the northwest by the city of Snoqualmie. Both communities lie near the center of the Mountains to Sound Greenway. Mount Si, the most prominent geological feature nearby, looms over the town. To the south is Rattlesnake Ridge. Mount Si stands at 4,167 feet (1,270 m) and towers above the town, itself at around 440 ft (130 m). A 4-mile (6 km) trail zigzags up to the summit with a vertical climb of 3,500 feet (1,100 m).

North Bend annexed some neighborhoods near Tanner and the Stilson area July 6, 2009.

The McGrath Hotel is located on the site of the cabin of William Henry Taylor, who platted North Bend in 1889. In October 1921, Jack McGrath and his wife Caroline purchased the site of their future venture, McGrath's Café; construction was completed as a one-story restaurant in 1922. In early 1926 the building was expanded two window bays westward, creating the hotel lobby (now the restaurant bar), and a second story was added to the entire structure to accommodate the hotel rooms of the new McGrath Hotel. After several years of deferred maintenance, the McGrath was purchased in 2000 by a local couple who spent two years rehabilitating the building. It is now listed on the National Register of Historic Places. The first floor currently houses a popular restaurant, the Iron Duck Public House.

On April 9, 1941 the North Bend Theatre opened its doors. It has continued operating as an independent movie theater since that day. In 1999, the theatre underwent a major renovation. In 2013, the theater was once more saved from extinction by a successful $100,000+ fundraiser to convert the projection system from 35mm cellulose to 4K digital video. During this series of renovations every part of the building was improved without sacrificing the distinctive character of this 1941 Art Deco theater.

Valley Center Stage is a downtown community theater that promotes the performing arts in all its aspects. The theater has regular shows featuring classics and comedy. In addition, the theater offers opportunities to valley residents to participate in the theater's productions.

The Visitors Information Center is operated by the North Bend Downtown Foundation and represents a significant step towards downtown revitalization and growing community pride through volunteer efforts. The Mountain View Gallery features local artwork and hosts special events for the community throughout the year. The modern Northwest Regional style center features easy to use touchscreen computers for visitors to access a variety of information on local attractions and history.

North Bend has a fairly modest trail system. The Snoqualmie Valley Regional Trail stretches from Duvall through Carnation, Fall City, Snoqualmie, and North Bend to Rattlesnake Lake. This 31.5-mile (50.7 km) trail connects to the John Wayne Pioneer Trail (which goes clear across Washington to the Idaho border) and to the city of Snoqualmie's extensive trail network. North Bend also has its own city trail system in downtown, the Si View neighborhood and along the South Fork of the Snoqualmie River in several places.

King County and the city of North Bend have designated the following landmarks: 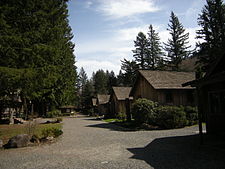 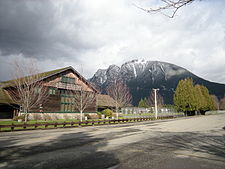 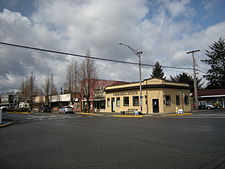 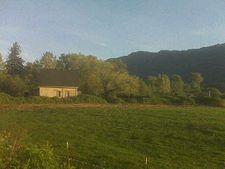 Our exclusive Local Market Research helps you make more informed decisions. Each week we publish market updates for North Bend. You can see the latest trends in pricing, affordability, supply and demand. We invest in this research so our clients always have the latest insights to make the best decisions with confidence. Below are the latest home pricing trends for North Bend based on zip code 98045. 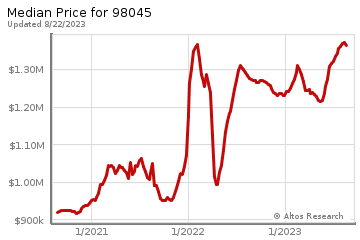 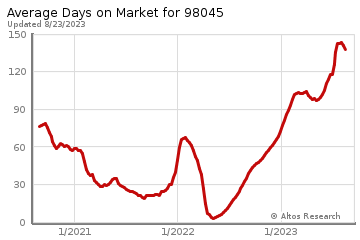 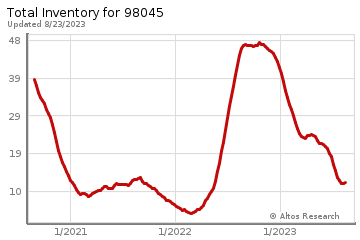 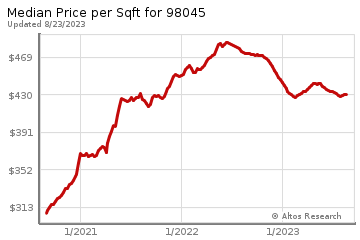 Back to All North Bend Homes For Sale