Ravenna Homes For Sale in Seattle

Ravenna is located north of the University District and has a quick transition from university housing to quiet residential streets and historic homes. Ravenna Park is a classic example, with stately brick Tudor homes and beautiful tree-lined streets. Candy Cane Lane, a Christmas fixture, is an enormous display of lights along the homes in one section of Ravenna. Parks are abundant, and close access to Roosevelt's business district make Ravenna a versatile neighborhood.

Ravenna has many green fields. One of them is Froula Playground (with baby swings, a sandbox, and tennis courts) at 7200 12th Ave NE located south of NE 75th St. Another greenfield named Ravenna-Eckstein Park in 6535 Ravenna Ave NE located east of Roosevelt High School. Ravenna-Eckstein Park has a playground, tennis courts, a basketball court, a community center, and a community garden. There's a large park in the Ravenna neighborhood named Ravenna Park at 5520 Ravenna Ave NE in southern Ravenna. Ravenna Park has a playground, tennis courts, a softball field, hiking trails, parking lots, bathrooms, and a picnic shelter. On the west side of Ravenna Park, there's Cowen Park at 5849 15th Ave NE. Cowen Park has a play area for kids, tennis courts, a softball field, barbecue pits, picnic tables, and restrooms. And there's a small green field named Whitaker Park in 1700 NE Naomi Pl located north of Ravenna Ravine. If you're looking for a park with beach access, there's East Green Lake Beach at 7201 East Green Lake Dr N in the west of Ravenna. East Green Lake Beach has access to fishing and swimming, picnic areas, nearby coffee shops & bars.

Ravenna is a neighborhood in northeastern Seattle, Washington named after Ravenna, Italy. Though Ravenna is considered a residential neighborhood, it also is home to several businesses, many of which are located in the University Village, a shopping mall.

Ravenna Park, located near University Village and the walking or biking route connecting Green Lake to Burke-Gilman Trail, is located within the neighborhood. 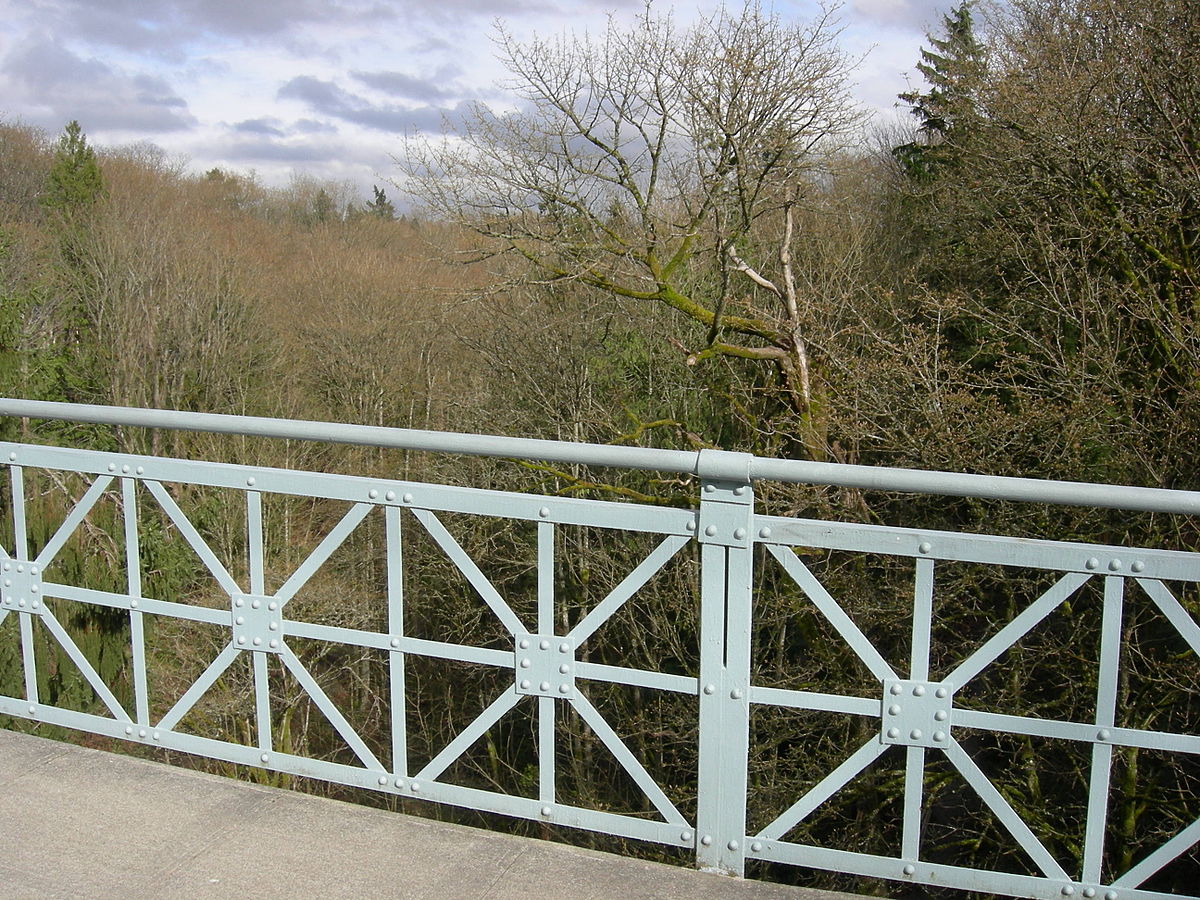 Ravenna Park, Seattle, Washington. Looking out from 20th Ave pedestrian/bicycle bridge. The bridge is on the National Register of Historic Places., 2007

What is now Ravenna has been inhabited since the end of the last glacial period (c. 8000 BCE–10,000 years ago). The Native American Duwamish (before contact, the Dkhw’Duw’Absh, "the People of the Inside") tribe of the Lushootseed (Skagit-Nisqually) Coast Salish nations had the prominent village of SWAH-tsoo-gweel ("portage") on then-adjacent Union Bay, and what is now Ravenna was their backyard before the arrival of White settlers. The Seattle, Lake Shore and Eastern Railway was built c. 1886 along what is now the Burke-Gilman Trail, following what was the shoreline past where the UW power plant and University Village are today. In 1891, a streetcar line followed 14th Avenue NE (what is now University Way NE, as illustrated in the Cowen's University Park Addition Seattle annex map below on this page), then followed near the southern boundary of what is now Ravenna Park, where the narrow right-of-way remains clearly visible beside the park. Ravenna Boulevard was built in 1903 as a small part of the Olmsted Brothers' grand plan for Seattle streets and parks. Ravenna incorporated as an independent town in 1906, which permitted Seattle to annex it in 1907. The original boundary of the Town of Ravenna when it was annexed extended from 15th Avenue NE eastward to 20th Avenue NE (above 65th Street NE) and eastward to 30th Ave NE (south of 65th Street NE), bounded on the south by 55th Street. Ravenna south of the Burke-Gilman Trail is filled land from dump sites at 26th Avenue, filling the drained Union Bay Marsh and much of Union Bay. University Village (1956) was built on the southernmost reclaimed land in Ravenna. 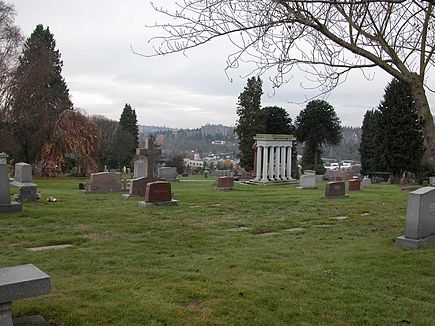 Calvary Cemetery in Ravenna/Bryant with University of Washington residence towers in background.

The principal arterial is 25th Avenue NE; minor arterials are 15th and 35th Avenues NE, and NE 65th Street; 40th Avenue NE and NE 55th Street are collector arterials. Besides the eponymous boulevard, arguably its most well-known street is Candy Cane Lane. On the length of Park Road (one block and a little roundabout) residents have been creating an elaborate Christmas display since 1951, bringing bumper-to-bumper traffic to the boulevard on December nights. The 20th Avenue NE collector arterial has become increasingly bike- and pedestrian-friendly with the closure of the park bridge to motor vehicles (1975). NE Ravenna Boulevard is a local bikeway.

An eponymous grocery has been at the same location on the boulevard since the 1920s. Most emblematic of the neighborhood are Queen Mary, serving Victorian English Tea, and the Duchess Tavern (1934). The only Volvo dealership in town is family-owned and in Ravenna-Bryant.

The accompanying photograph shows an area around the railroad depot in the late 19th century. Between the depot and the mill could now be 25th Avenue NE at the Burke-Gilman Trail. Left of the mill is the Ravenna Depot, center. The straight road left continues past Roper's Grocery on 24th Street, just left of the tree, left of center, to what is now the SE corner of Ravenna Park, behind the house between the foreground trees. Behind the hamlet of Ravenna, middle background, is the new Seattle Female College (c. 1890), "non-sectarian, distinctly Christian", and including the Seattle Conservatory of Music and Ravenna Seminary. The stable for the college is beyond the depot. Left of the college and above the small foreground snag, faintly, is a broad side of the Phillips house, still extant today. 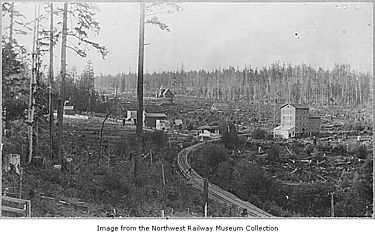 The conjoined Cowen Park and Ravenna Park is located at a southwest corner of Ravenna-Bryant, reaching from beyond the source of Ravenna Creek beside nearby Brooklyn Avenue and Ravenna Boulevard, under the 15th Avenue bridge to 25th Avenue NE. The parks comprise the centerpiece of the neighborhood.

For many decades of Seattle city history, the park ravine had been ignored by loggers and farmers and still possessed full old-growth timber rising nearly 400 feet. The trees remained through the Alaska–Yukon–Pacific Exposition of 1908, at which they were featured exhibitions. Public controversy about them declined after their gradual disappearance in suspicious circumstances by 1926. Today, none of that size remain anywhere in the world. The legacy helped save Seward and Carkeek parks, and helped galvanize conservation efforts ever since. Today, a single Sierra Redwood stands over the Medicinal Herb Garden at a south edge of the UW campus, at 106 feet somewhat over a quarter of the height of those of Cowen Park-Ravenna Park. 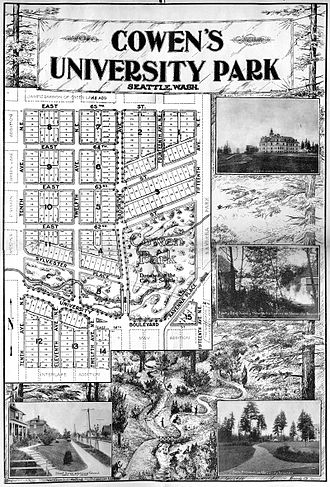 Projects have included daylighting portions of the creek (partly with the goal of restoring native fish runs), building and maintaining trails, and restoring riparian habitat, sometimes in collaboration with the University of Washington's environmental science program. Completion of downstream daylighting to the mouth of the creek beside Union Bay Natural Area and restoration of migrating fish has come into conflict with property owners, specifically the owners of University Village, even though a revised daylighting project would not include their land.

Our Ravenna market research helps you make more informed decisions about homes in North Seattle. Each week we publish market updates for Ravenna, in its 98125 zip code. You can see the latest trends in pricing, affordability, supply and demand. We invest in this research so our clients always have the latest insights to make the best decisions with confidence. 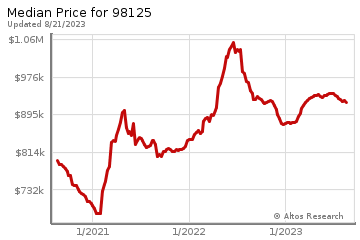 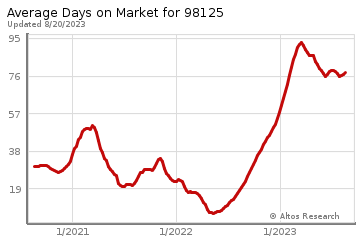 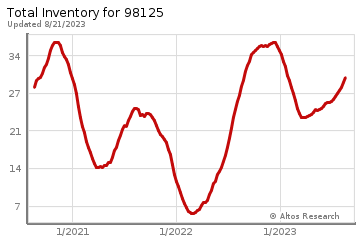 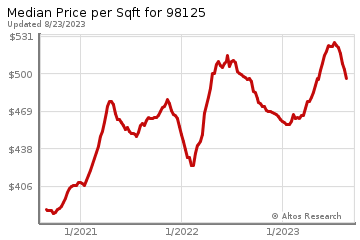