Wedgwood Homes For Sale in Seattle

Wedgwood is a residential neighborhood in Northeast Seattle with mostly single family homes and great access to parks and recreation. With a couple of local business districts along the main thoroughfares, neighbors can stay local or travel just a few blocks to Ravenna or Lake City Way for any other needs. Originally named for the developer's Wedgwood china (the correct spelling), the neighborhood has developed into a well-respected neighborhood with an attractive residential feel. Very popular with an old fashioned feel.

Wedgwood doesn't have many greenfields. The two greenfields you will find in Wedgwood are Inverness Ravine Park (a private and natural area) in 8619 45th Ave NE in the eastern Wedgwood and Dahl Playfield (which has a playground, baseball/softball fields, and a soccer field) in 7700 25th Ave NE in the southwestern Wedgwood. There are other greenfields near the Wedgwood neighborhood like Sacajawea Playground in 1726 NE 94th St in the south of Sacajawea Elementary School (northwest of Wedgwood) and Mock Creek Ravine in 9612 35th Ave NE near Northeast Veterinary Hospital (north of Wedgwood).  In the southeast of Wedgwood, you will find View Ridge Playfield Park at 4408 NE 70th St. View Ridge Playfield Park has a playground, basketball courts, a softball field, and an open green field. And if you're looking for a place to swim or have a picnic party, visit Matthews Beach Park at 5100 NE 93rd St in the northeast of Wedgwood.

Wedgwood is a middle class residential neighborhood of northeast Seattle, Washington with a modest commercial strip. Wedgwood is located about two miles (3.2 km) north, and slightly east, of the University of Washington; it is about six miles (9.7 km) northeast of Downtown. The neighborhood is further typical of Seattle neighborhoods in having more than one name and having different, overlapping, but well-documented definitions of the neighborhood.

The misspelling Wedgewood is not uncommon—it is used by at least five businesses and even appears in the unofficial City Clerk's Neighborhood Map Atlas—but the origin and spelling of the name are clear: the neighborhood was named after the English bone china-maker Wedgwood, the favorite of the wife of Albert ("Al") Balch (1903–1976), the developer who named the neighborhood. Balch was also the founder of adjoining View Ridge.

The area has been inhabited since the end of the last glacial period (c. 8,000 BCE—10,000 years ago). The Dkhw'Duw'Absh, "the People of the Inside", and the xachua'bsh or hah-choo-AHBSH, "People of a Large Lake" or "Lake People", today the Duwamish tribe, Native Americans of the Lushootseed (Skagit-Nisqually) Coast Salish hunted and traveled through what is now Wedgwood. The Wedgwood Rock, a glacial erratic boulder 19 ft (5.8 m) tall by 75 ft (23 m) circumference became the intersection of a number of trails through dense, old growth forest that covered what is now Seattle. The neighborhood has adopted Big Rock after it was protected from housing development in 1941. 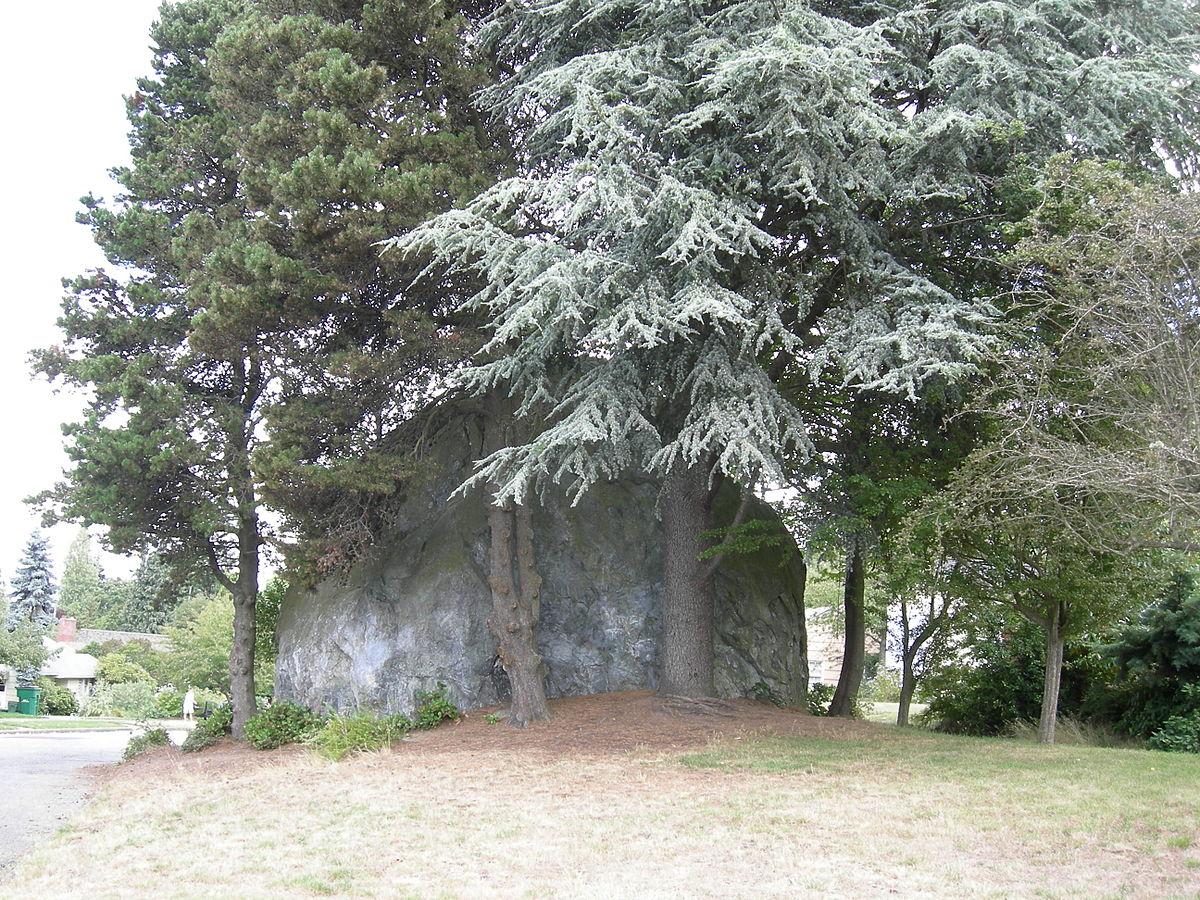 The land that formed the original core of Wedgwood, west of 35th Avenue NE between 80th and 85th Streets, was at one time a heavily wooded ginseng farm. Charles E. Thorpe had cleared a portion of his 40-acre (160,000 m2) tract north of the Seattle city limits of the time, building a log cabin from the wood of his own trees. By the 1920s, 35th Avenue NE was becoming a thoroughfare with homes and businesses (the first store opened in 1922), the electric (1923), water (1926), and sewer grids had been extended to the area, and it was becoming too urban for Thorpe's tastes. The Jesuit institution Seattle University paid Thorpe $65,000 for the property, planning to build a new campus there and move north from First Hill. Thorpe left Seattle, never to return.

One month later came the Stock Market Crash of 1929. The Great Depression put the Jesuits plans for the new campus on hold. Thorpe's cabin became St. Ignatius Parish in 1929; the congregation grew through the Depression years, although it was served at that time only by visiting priests. By 1940, the Jesuits had decided not to relocate Seattle University, and sold Thorpe's 40 acres (160,000 m2) to Albert Balch at a loss, for only $22,500, barely a third of what they had paid for the land in 1929.

A Catholic presence remains in the neighborhood: the parish of St. Ignatius became the parish of Our Lady of the Lake at its present location on 35th Avenue at 89th Street NE (c. 1961). 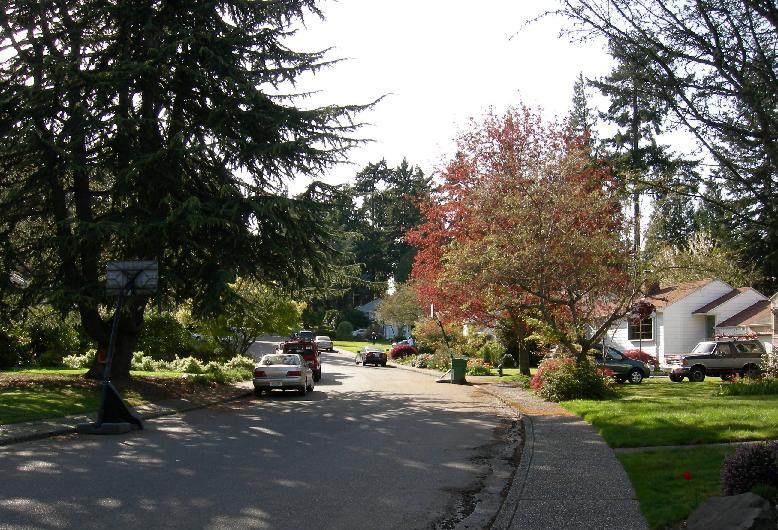 When Balch obtained the land from the Jesuits, it was still "completely undeveloped, heavily treed, and with only one structure," Thorpe's cabin.

Major development of the neighborhood began during World War II with defense worker housing; initial development was largely by Balch and his partner Maury Setzer. Balch and Setzer built 500 homes on 40 acres (160,000 m², 16 hectares), constituting the center of today's Wedgwood neighborhood. At the time, the area was north of Seattle city limits (Seattle ended at NE 65th Street). In its first act of community organizing, Wedgwood formed its own Volunteer Fire Department (Fire District #19), founded November 11, 1943, absorbed (with Wedgwood) into the city March 20, 1945. During its short life, the volunteer department operated a Ford Model A truck with a pump, based in the garage of a neighborhood home. In this wartime period, many of the volunteer firefighters were women.

Other portions of Wedgwood have distinct histories of their own. In 1936, Dr. and Mrs. Philip M. Rogers purchased 15 acres (61,000 m2) between 40th and 45th Avenues NE, from NE 88th Street to NE 92nd Street. Maple Creek flows through this property, forming a ravine. Until shortly after 1950, they left the land almost entirely undeveloped, allowing it to be used as a Boy Scout camp. According to Valarie Bunn, at the time "no traffic noise could be heard and no electric lights" could be seen in the area of the camp. The land was developed in the 1950s. The Earl J. McLaughlin Plat (between NE 85th and NE 90th Streets, and 30th and 35th Avenue NE) was filed in 1907, but at the time there was no city water or electricity in the area. Few lots were sold at that time, and those were sold cheaply. In 1917, Earl J. McLaughlin relocated to Cleveland, Ohio, where he remained active in real estate for 12 years, before emigrating to Canada. 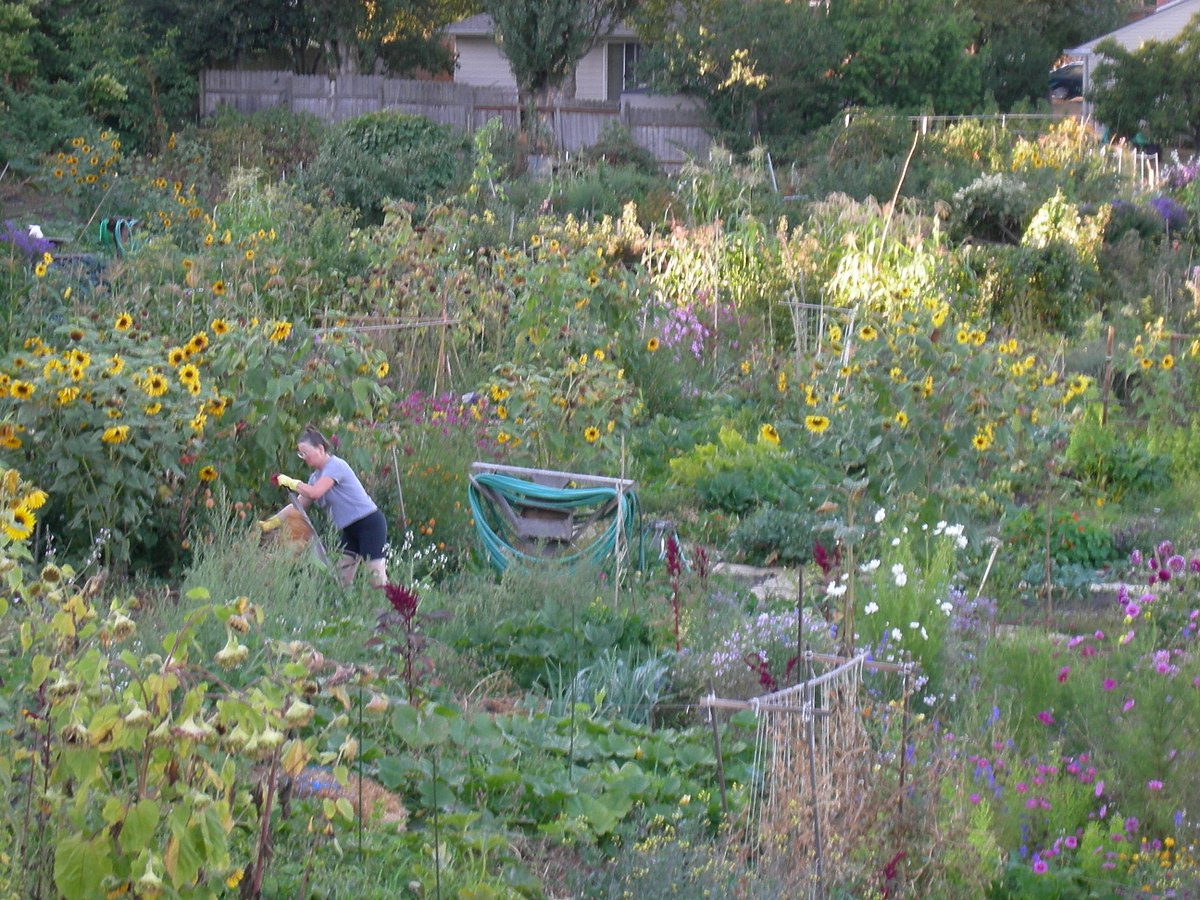 The large P-Patch Community Garden near the west edge of the neighborhood, and the adjoining University Prep School and Temple Beth Am (Reform synagogue) are on land that remained a working farm as late as 1965. Wedgwood has Seattle's oldest and largest P-Patch (mid-1960s); as of 2005, there are now 52 others. The "P" originally stood for "Picardo", the family who farmed the land (1922–1965).

Just south of the old Picardo Farm is Dahl Playfield. Like the P-Patch, it is former peat bog land, once known as the Ravenna Swamp. In the 1940s houses stood on part of what is now the playfield; at that time, Picardo Farm was the site contemplated for a park. However, after sewer lines were built along 25th Avenue NE in the late 1940s, houses began sinking in the peat; the city bought them out and turned the land into the "80th Street Playfield". In 1952, the bog caught fire: portions subsided as much as 5 feet (1.5 m), and the park was temporarily closed. Over the next few years, an estimated 75,000 cubic yards (57,000 cubic meters) of peat was replaced by fill dirt, and the park reopened. In 1955, the park was renamed after a former Park Board director, Waldo J. Dahl. In September 1992, the Wedgwood Community Council officially "adopted" the park.

The Wedgewood Estates apartment complex on NE 75th Street between 37th and 39th avenues NE was purchased by the Seattle Housing Authority in 2001 in an effort to preserve a supply of moderately priced housing in this part of Seattle. 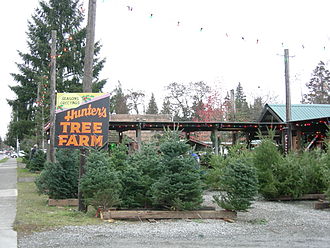 Mr. and Mrs. Nick Jacklin opened the first store in what is now Wedgwood in 1922, before either electricity or city water reached the neighborhood. The building still survives as the garage of a house in the 7500 block of 35th Avenue NE. That same block was later (1949–1974) home of McGillivray's Variety and Gift Store, whose range of wares ranged from penny candy, children's clothing and hundreds of different children's birthday cards to "fine collector dolls… in a better selection than… even… the downtown Frederick & Nelson's" and "sequins in every color manufactured".

Half a mile (0.7 km) north, McVicar's Hardware Store (1946–1986)—in the space in the 8500 block of 35th Avenue NE opened shortly after World War II. The shortage of consumer goods right after the war meant that some of their early stock was manufactured on-site from war surplus. Adapting their business to whatever people in the neighborhood wanted to buy, as Wedgwood residents began putting in lawns and gardens, McVicar's sold them the requisite supplies; they sold specialty foods and rented out skis; they were also, for a decade, the only hardware store in the state licensed to sell beer and wine. They ran do-it-yourself clinics on everything from tools to gourmet cooking; in 1954, they were mentioned in a Time magazine article on the do-it-yourself trend. 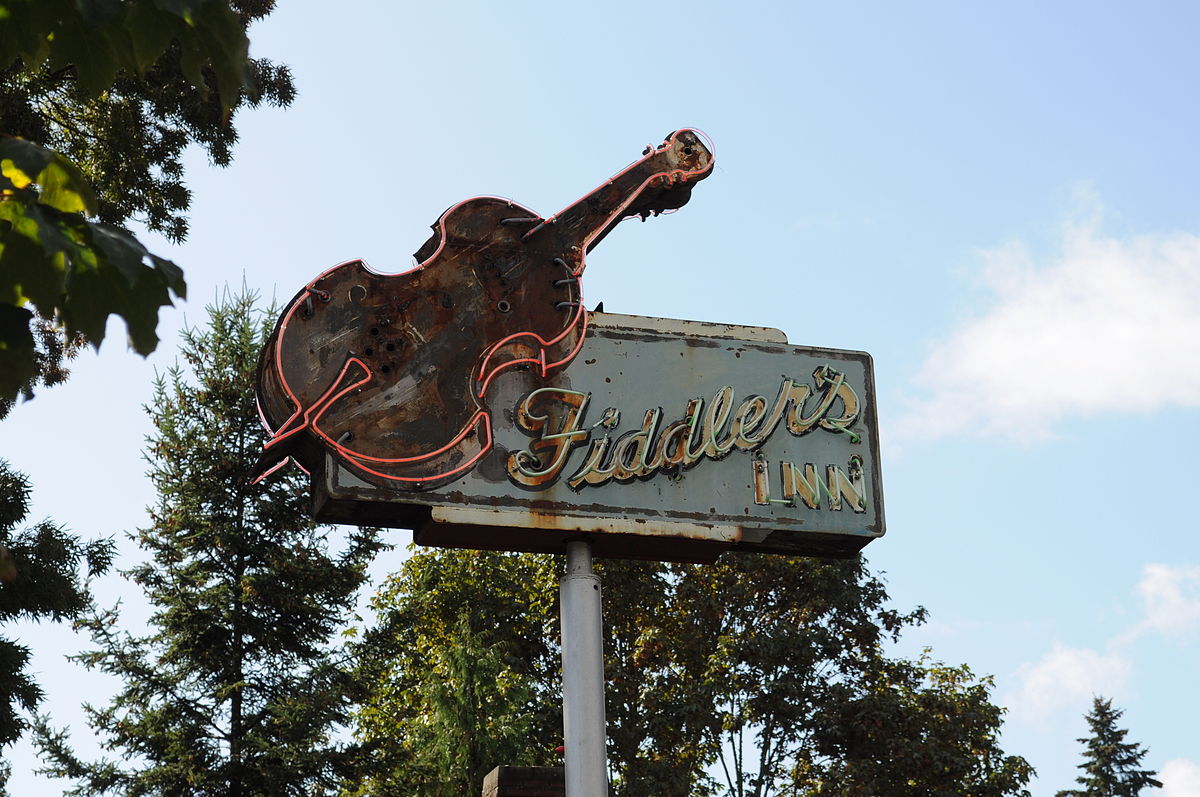 Fiddler's Inn sign, on 35th NE near the north end of the Wedgwood neighborhood, Seattle, Washington.

Today, there is a shopping district along 35th Avenue NE, with concentrations of stores at NE 75th Street and NE 85th Street, including a supermarket at each of these corners; a lesser concentration near NE 95th Street includes the Fiddler's Inn bar, a live music venue, one of relatively few this far from the center of the city. Near that intersection, a gas station, veterinary office and east-coast style Hunan Chinese restaurant and bar reside. The Wedgwood Broiler is a quintessential '50s American style neighborhood restaurant and bar. And while 35th NE doesn't rise to the level of having "street life", it does have a good smattering of businesses, including numerous banks, a U.S. Post Office, coffee shops, restaurants, several popular bars, a dry cleaner, the Seattle Audubon Society, miscellaneous medical offices, and a variety of retail stores, mostly independent. 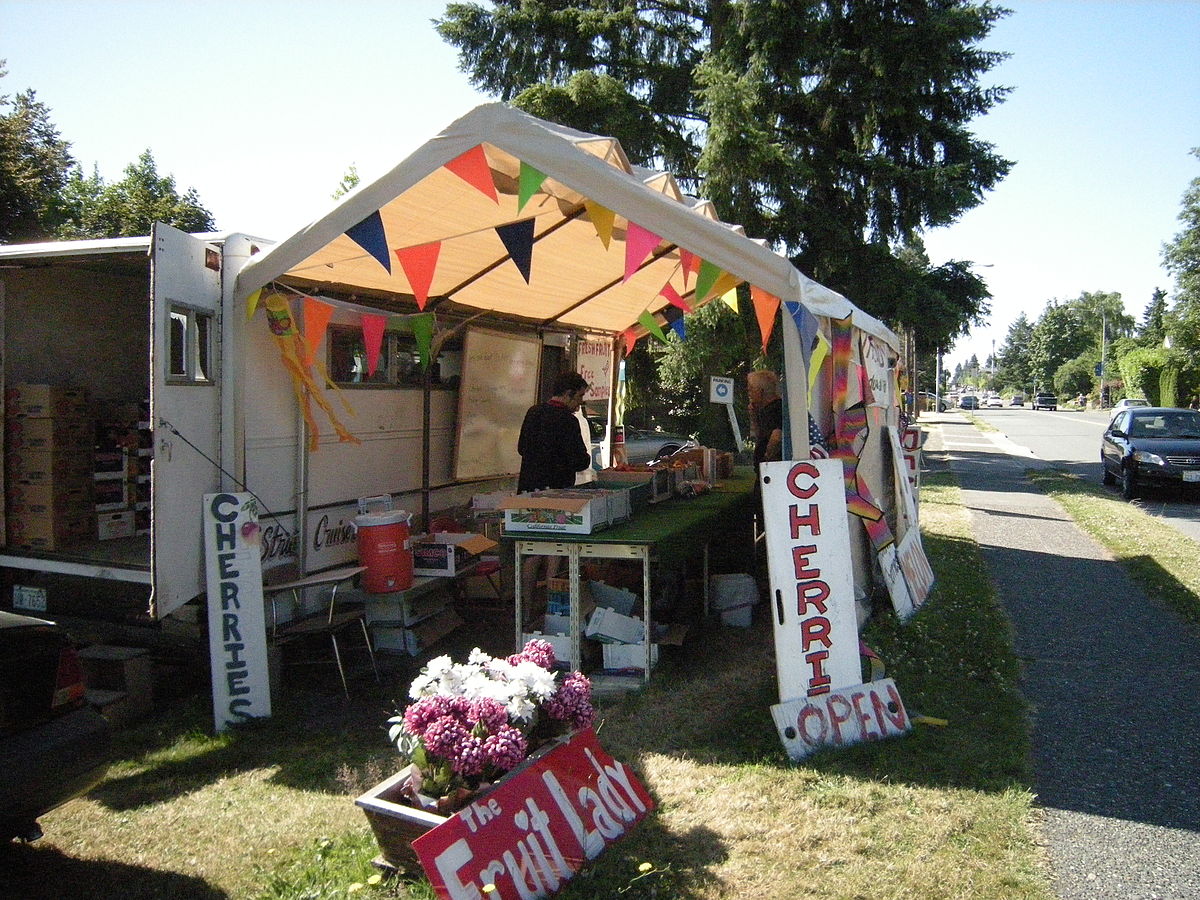 The Fruit Lady, a seasonal business in Wedgwood (2008)

On NE 68th Street, just south of what the city unofficially defines to be Wedgwood proper, is the Seattle Public Library Northeast Branch, the largest neighborhood branch and the second-busiest public library, second only to the Seattle Central Library. At NE 70th Street is the Grateful Bread Cafe, a bakery-coffeehouse that sometimes hosts live music and community events; and Seattle-based Top Pot Doughnuts. 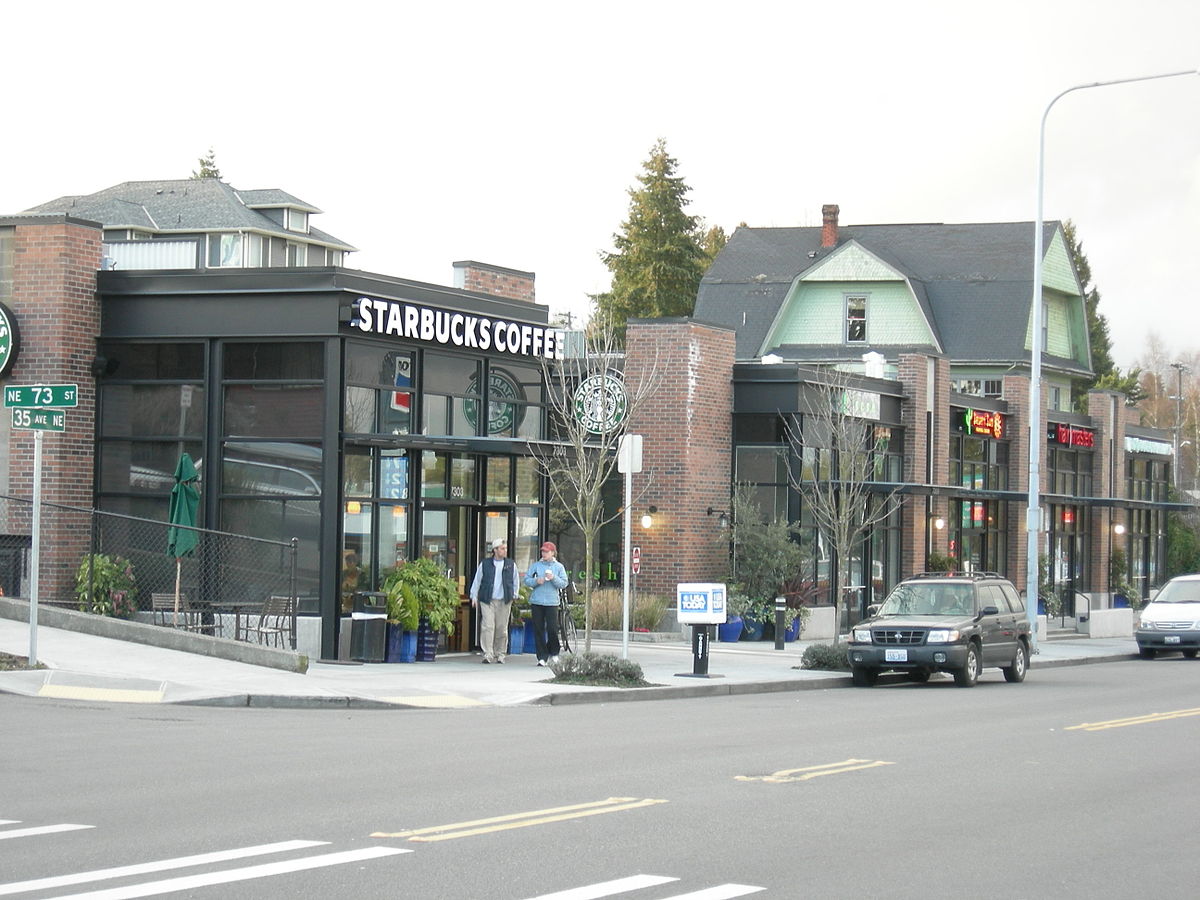 Wedgwood neighborhood schools (as defined by the unofficial city map) include:

Like all Seattle neighborhoods, Wedgwood has no official or universally agreed-upon borders. The unofficial City Clerk's Neighborhood Map Atlas shows its boundaries as

Our Wedgwood market research helps you make more informed decisions about homes in North Seattle. Each week we publish market updates for Wedgwood, in its 98103 zip code. You can see the latest trends in pricing, affordability, supply and demand. We invest in this research so our clients always have the latest insights to make the best decisions with confidence.