Waterfront homes make up a large percentage of the luxury real estate in Greater Seattle.  Puyallup and other nearby cities will often have waterfront homes available in a variety of locations. Seattle-area waterfront properties include luxury lakefront homes on Lake Washington, Puget Sound waterfront estates, and floating homes and houseboats on Lake Union.

Puyallup is located about 30 miles south of Seattle and 5 miles east of Tacoma. Named for a nearby native American tribe, the city's name confounds outsiders (pronounce it "p-you-al-up"). The city of Puyallup has over 30,000 residents, and is a mix of suburban and rural. Much of the downtown shopping core in Puyallup is a quaint historic district. The state's largest annual fair takes place in Puyallup every summer, and the Puyallup fairgrounds are a significant part of the landscape year round, hosting other entertainment events throughout the year.

Puyallup (/pjuːˈæləp/ (About this soundlisten) pew-AL-əp or /pjuːˈɔːləp/ pew-AWL-əp) is a city in Pierce County, Washington, about 10 miles (16 km) southeast of Tacoma and 35 miles (56 km) south of Seattle. The population was 37,022 at the 2010 Census and the Washington State Office of Financial Management estimated the 2019 population at 42,361. Named after the Puyallup Tribe of Native Americans, Puyallup means "the generous people". It is also home to the Washington State Fair, the state's main fair.

In 1833, The Puyallup Valley was a maze of creeks and old forest growth. It was subjected to frequent floods and massive log jams from the meandering river. The first white settlers were part of the first wagon train to cross the Cascades at Naches Pass in 1853. Native Americans numbered about 2,000 in what is now the Puyallup Valley in the 1830s and 1840s. The first European settlers arrived in the 1850s. In 1877, Ezra Meeker platted a townsite and named it Puyallup after the local Puyallup Indian tribes, 11 years after departing from Indiana. The town grew rapidly throughout the 1880s, in large part thanks to Meeker's hop farm, which brought in millions of dollars to Puyallup, leading to it eventually being incorporated in 1890, with Ezra Meeker as its first mayor. The turn of the 20th century brought change to the valley with the growth of nearby Tacoma and the interurban rail lines. The Western Washington Fairgrounds were developed giving local farmers a place to exhibit their crops and livestock. During the early part of World War II, the fairgrounds were part of Camp Harmony, a temporary Japanese American internment camp for more than 7,000 detainees, most of whom were American citizens. Subsequently, they were moved to the Minidoka relocation center near Twin Falls, Idaho. 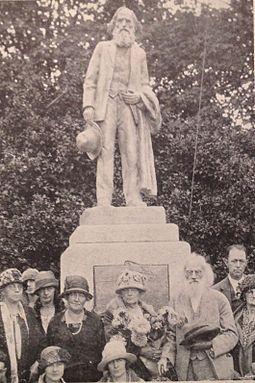 Ezra Meeker (near lower right) at the 1926 dedication of his own statue by Alonzo Victor Lewis in Puyallup's Pioneer Park, on the site of his original cabin

Puyallup is 12.2 mi² (31.6 km²). As it is bordered largely by unincorporated Pierce County, the closest neighbors include the city of Sumner to the northeast, Fife and Edgewood to the north, Tacoma to the northwest, Summit and Midland to the west, South Hill, Graham and Frederickson to the south, McMillin and Orting to the southeast, and Alderton to the east.

Downtown and the valley neighborhoods of Puyallup would likely be damaged or destroyed in a moderate or large eruption of nearby Mount Rainier. 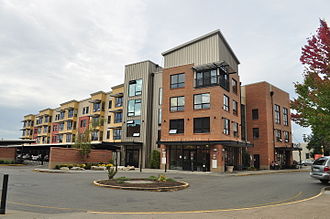 Puyallup experiences an Oceanic climate (Köppen classification: Csb; Trewartha classification: Do). Winters are cool and wet. High temperatures average in the mid to upper 40s, with lows near freezing. The surrounding hills (averaging 500 feet (150 m) above sea level) often experience the extremes of winter, with lows below freezing more often, and higher snowfall amounts. Snowfall is rare, and often only occurs on a few days a year, sometimes as early as November, and as late as April. Spring brings less rain, and more mild temperatures, with highs regularly in the mid 50s (12–14 °C), to around 60 (15 °C). Spring often records the first 70 °F (21 °C) mark. Summers are warm and dry, with highs in the 70s most days. Many days can max out in the 80s, and sometimes the 90s. 100 F (37.7 °C) readings happen very rarely; On 29 July 2009, during a prolonged period of hot weather, Puyallup recorded a reading of 105 °F (40.5 °C), the warmest since records have been kept. Summer thunderstorms happen occasionally, but are often isolated and rarely (if ever) severe. Storms often roll off the Cascades, and into the surrounding areas. Often, these storms are a result of warm moist air from monsoons in the southwestern United States. Summer is warmest in July and August, and occasionally September. By October and the fall season, temperatures begin to tumble and rain begins to pick up.

The valley in which Puyallup was originally settled forms the town. Its fertile soil is optimal for the acres of daffodils which were grown for distribution worldwide, and are featured in the town's annual spring parade. The Puyallup River meanders between the hills, through the glacial basin, from its namesake glacier on Mt. Rainier, terminating in Puget Sound at the Port of Tacoma. It is cold, silty, and brown, sometimes green. From most perspectives in the town of Puyallup, Mt. Rainier is visible to the southeast.

Downtown Puyallup has several notable landmarks, including Ezra Meeker's mansion, which was built and inhabited by one of the town's founding families, who made their way to Puyallup via the Oregon trail. The downtown shopping district is made up of historic buildings, which date to the town's origin. Pioneer Park is a community focal point, which boasts a public library, a park with a playground, and walking paths. As the focal point of the park, there is a bronze statue honoring Ezra Meeker. A new element is the public stage by the public library. At the public stage local musicians put on free shows for the public. Southeast Puyallup is also where the Pierce County Foothills Trail begins.

1890 Italianate Victorian home of Oregon Trail pioneer Ezra Meeker and his wife Eliza Jane Meeker. Known as the “Hop King”, he ultimately lost a fortune due to a disease in the hops. More famous for following the Oregon Trail throughout the years and erecting monuments along the trail to remind people, today it is a small house museum owned and operated by the Puyallup Historical Society at Meeker Mansion. Formerly the Ezra Meeker Historical Society, the mansion can be rented for weddings, teas or other social events (see "Meeker Mansion". meekermansion.org.). 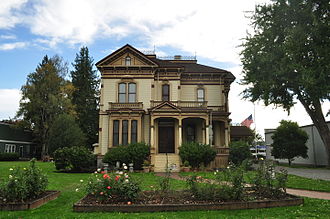 During World War II, the Puyallup Fairgrounds (i.e., The Puyallup Assembly Area) were used as an internment camp for United States citizens or residents of Japanese descent or origin that was called "Camp Harmony".

Puyallup also hosts and is origin of the annual four-part Daffodil Parade, which takes place every year in Tacoma, Puyallup, Sumner, and Orting.

The parade includes many groups and has many floats, most of which are covered in daffodils, or are themed in the daffodil season. Most of the local junior high and high school marching bands also march. Car clubs, veteran groups and also some businesses are a part of the parade.

Puyallup is known for its myriad antiques stores, many of which are located next to each other on the main north-south street of Meridian. Puyallup is one of many cities and towns in Washington that contains an 'old-fashioned' downtown shopping area. 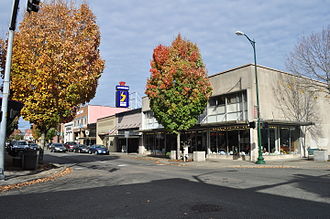 East side of 100 block of S. Meridian; in foreground, an antique shop in a former J.C. Penney.

The Karshner Museum is the only K–12 teaching museum owned and operated by a school district west of the Mississippi. The essential education and curriculum-based program serves the Puyallup School District's 20,000 K–12 student population. Since 1930, the Karshner Museum has provided hands-on and curriculum-based learning experiences to thousands of students through the museum visit program. The education trunk or "Discovery Kit" program has served students, teachers and community members since the 1970s. These Kits utilize real or replica artifacts for the purposes of bringing history, art and culture to life in the school classroom.

Starting in 1995, the regional nonprofit organization Valley Arts United began working with local volunteers to support a rotating selection of outdoor public artwork. Consisting mostly of statuary dispersed about the downtown core, this collection has grown to a collection of about 32 permanent pieces. New works are added regularly.

The Puyallup Main Street Association produces the Puyallup Farmers' Market each year. The market is open Saturdays (9 a.m. to 2 p.m.) from mid-April to mid-October, with a Holiday Market in December (together with the lighted Santa Parade – first Saturday of December). Puyallup Farmers' Market is the largest market in Pierce County and one of the largest in the state. Thousands of people come each week to purchase produce, plants and seeds, flowers, baked goods, meats and cheese, food, local handcrafts, and more. Free live entertainment. The market fills Pioneer Park and the modern pavilion building, and takes over Elm and 4th streets. 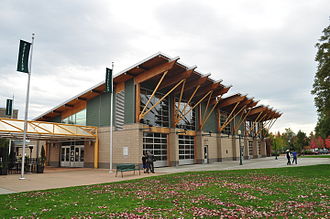 The Puyallup School District has over 30 schools attended by 20,000+ students. The district is the ninth largest in Washington state, and extends to neighboring South Hill, some of Tacoma, and the Edgewood area. Some local schools hold once-a-year warning drills because of the dangers of lahars if and when Mount Rainier erupts. Students will have at most 15 minutes to find higher land or the top of a building.

Puyallup is also home to Pierce College Puyallup, a community college that opened in 1990.

The city is served by the Puyallup Public Library, which was established in 1913 and has been housed in its current building in Pioneer Park since 2002. It is not affiliated with either the Tacoma Public Library or the Pierce County Library System.

The Herald is the local newspaper for eastern Pierce County. It is published once a week on Wednesdays. The paper is distributed by The News Tribune.

Puyallup is located at the intersection of State Route 167 and State Route 512, with freeway access to Lakewood and the Green River Valley. The city is also served by Pierce Transit buses and Sounder commuter rail at Puyallup station.

The city is located near the Pierce County Airport (KPLU), a small municipal airport in South Hill.

Our exclusive Local Market Research helps you make more informed decisions. Each week we publish market updates for Puyallup. You can see the latest trends in pricing, affordability, supply and demand. We invest in this research so our clients always have the latest insights to make the best decisions with confidence. Below are the latest home pricing trends for Puyallup based on zip code 98371. 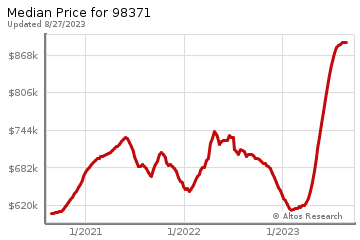 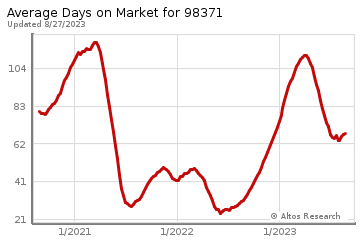 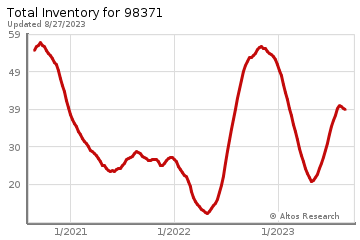 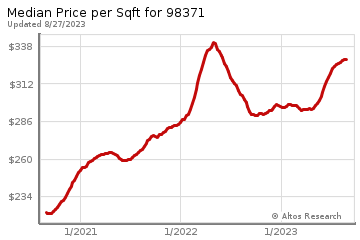 Back to All Puyallup Homes For Sale