Water View homes make up a large percentage of the luxury real estate in Greater Seattle.  Renton and other nearby cities will often have water view homes available in a variety of locations. Seattle-area water view properties include luxury lakefront homes on Lake Washington, Puget Sound water view estates, and floating homes and houseboats on Lake Union.

Renton is located southeast of Seattle and just south of Bellevue. The city is best known for being the long-time headquarters of the Boeing Company, which still has limited operations here. With a population of 91,000, the city is fairly large but still maintains a smaller town feel in its historic downtown district. New developments like the Renton Landing have brought more modern dining and entertainment options to the area, as well as a larger contingency of new condos available near Lake Washington. Most of Renton is comprised of fairly affordable residential neighborhoods interspersed with small retail districts serving the local residents.

Renton is a city in King County, Washington, and a suburb of Seattle. Situated 11 miles (18 km) southeast of downtown Seattle, Renton straddles the southeast shore of Lake Washington, at the mouth of the Cedar River.

After a long history as an important salmon fishing area for Native Americans, Renton was first settled by people of European descent in the 1860s. Its early economy was based on coal mining, clay production, and timber export. Today, Renton is best known as the final assembly point for the Boeing 737 family of commercial airplanes, but it is also home to a growing number of well known manufacturing, technology, and healthcare organizations, including Boeing Commercial Airplanes Division, Paccar, Kaiser Permanente, IKEA, Providence Health & Services, UW Medicine, and Wizards of the Coast. As of 2019, the population of Renton is estimated at 101,751, up from 90,927 at the 2010 census. Renton is currently the eighth-largest city in Washington and the fourth-largest in King County. Since 2008, the National Football League's Seattle Seahawks have had a training facility in Renton, the Virginia Mason Athletic Center (VMAC), which is the second-largest facility in the NFL at 200,000 square feet (19,000 m2). 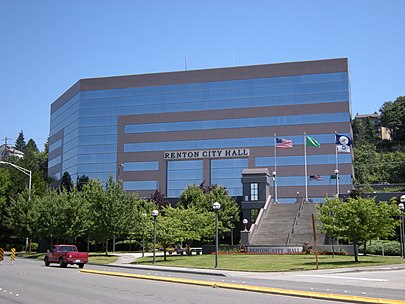 Among the first European settlers in the present-day Renton area were Henry Tobin and his wife Diana. The town of Renton was accessed via the Seattle and Walla Walla Railroad, the first railroad to be built to Seattle, and was in the vicinity of several coal mines that attracted entrepreneurs like Erasmus M. Smithers, who is credited with the founding and establishment of the town in 1875. Smithers named Renton in honor of Captain William Renton, a local lumber and shipping merchant who invested heavily in the coal trade. Smithers discovered coal there and brought in Charles D. Shattuck as the coal mine operator. 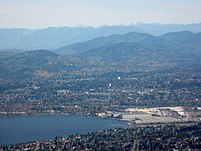 Aerial view of south end of Lake Washington, Seattle, looking east towards Cascade Mountains, with a view of Boeing plant at the southern tip. Taken by myself from a commercial airliner window. 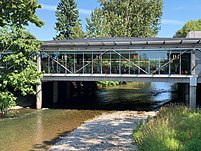 The Renton Public Library spans the Cedar River in Renton, WA. Originally constructed in 1966, it was completely rebuilt in 2014-2015 to modern standards.

The population sharply increased during World War II when Boeing built their Renton Factory to produce the B-29 Superfortress. Renton grew from a population of 4,488 in 1940 to 16,039 in 1950.

The game company Wizards of the Coast also is headquartered in Renton. Providence Health System has centralized its administrative offices in Renton, along with Group Health Cooperative.

Owing to its location at the confluence of three major freeways (I-5, I-405, and SR 167), Renton's economic development team has lured a number of specialty retailers that draw consumers from around the region, including Fry's Electronics and IKEA. Some retail establishments were unwanted though, and the city successfully defended zoning restrictions on pornographic theaters before the U.S. Supreme Court in Renton v. Playtime Theatres, Inc.

The Renton Public Library was built directly over the Cedar River and opened in 1966. It stretches 80 feet (24 m) across the river, next to Liberty Park, and was the main branch of the city's independent library system until its 2010 annexation into the King County Library system.

The city government has encouraged redevelopment of industrial areas around Downtown Renton and near Southcenter since the 1980s. The first IKEA in the Pacific Northwest opened in Renton in 1994. The former Longacres horse-racing track was redeveloped in the 1990s to support offices for Boeing and the Federal Reserve Bank, which moved from its Seattle building. Port Quendall, a land parcel in north Renton, is home to the Virginia Mason Athletic Center (VMAC), housing the Seattle Seahawks Headquarters and training facility that opened in August 2008; before then, the Seahawks trained in Kirkland.

In the mid-1990s, Renton undertook a major redevelopment effort to revitalize its downtown core, which had declined in commercial prominence since the opening of the Southcenter Mall in Tukwila in 1968. The many car dealerships that had previously occupied the center of downtown Renton were encouraged through economic incentives to relocate to a newly created auto sales zone close to the I-405/SR-167 interchange. In place of the old dealerships downtown, a new transit center and parking garage were built in partnership with King County Metro. The transit center is surrounded by several multi-family residential buildings and a small town square named Piazza Park, which hosts a weekly farmers' market.

Centered on former Boeing Co. property near the south shore of Lake Washington is a 68 acres (280,000 m2) residential and commercial development named The Landing. To the north of the Landing, a hotel and office development on the lakefront called Southport is under development at the site of the former Shuffleton power plant, which was demolished in 2001. A 347-room hotel operated under the Hyatt Regency brand opened in June 2017. Three 9-story office towers are currently under construction at the Southport site, and are expected to open in 2019. 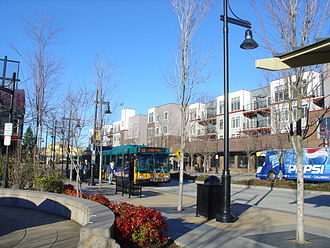 Potential Annexation Areas (PAAs) include the communities of Fairwood southeast of Renton, the East Renton Plateau on the eastern edge of Renton, and West Hill northwest of Renton. These communities are large unincorporated urban areas that are encouraged by the King County Annexation Initiative to incorporate as cities or annex into neighboring cities. As of 2012 these three PAAs are not part of the City of Renton, and not included in its demographics or statistics.

Renton is bordered to the north by Newcastle. Along the east side of Renton is the Urban Growth Boundary established by King County, as such there is no incorporated city directly east of Renton. The geographical characteristics of Renton's eastern border are varied and include (from north to south) the south flank of Cougar Mountain descending southward merging with the community of May Valley. The terrain then elevates south of May Valley to the communities of the East Renton Plateau before descending to the north bank of the Cedar River. Renton is bordered to the south by the city of Kent. The western border consists of the city of Tukwila, and finally the unincorporated King County community West Hill and Lake Washington to the northwest.

Boeing Commercial Airplanes, Boeing Capital, Providence Health & Services, and Wizards of the Coast have their headquarters in Renton.

The Boeing Renton Factory has operated since World War II when it manufactured the B-29 Superfortress; currently, it produces the 737 airliner. The Renton plant produced the Jetfoil and Pegasus class hydrofoils in the 1970s. As of 2001, 40% of all commercial aircraft in the air were assembled in Renton. Boeing remains the largest employer in Renton, which is home to over 10,000 employees and three of the aerospace giant's six major business divisions: Boeing Commercial Airplanes, Boeing Capital Corporation and the Shared Services Group. The local newspaper in the 1970s, the Record Chronicle, proclaimed the city the jet capital of the world. 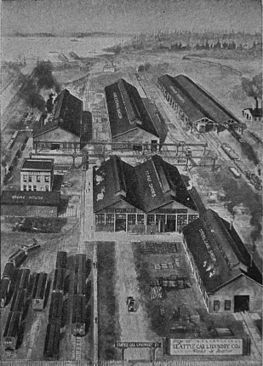 Paccar has traditionally been a large employer in the city as well with its Kenworth Truck plant located in Renton's industrial area on the south end of Lake Washington. In 1907 the Seattle Car Mfg Company also known as the Car Company moved to a large manufacturing plant in Renton after demand for the company's railroad equipment exceeded the capacity of its Seattle plant. The Car Company was the only manufacturer of train cars on the west coast.

The Renton plant expanded to foundry capabilities in 1911, and Seattle Car and Foundry Co merged with the Twohy Brothers of Portland in 1917 and became the Pacific Car and Foundry Company or Paccar. During the great depression the Renton Paccar plant developed power winches for use in the logging industry. When World War II arrived the Renton manufacturing switched its production towards the war effort, and by the war's end in 1945 had built 1,500 Sherman Tanks. In the second half of the 20th century there was not enough repeat business for Paccar-built train cars as rail equipment in 1965 came to only 1/3 of the company's sales. Thus the Paccar Renton plant began manufacturing structural steel until the 1970s recession. In the early 1980s the Paccar Railcar Division; the last remnants of the original Pacific Car and Foundry Co closed down. In 1993, a new Kenworth assembly plant opened on the former site of Pacific Car and Foundry. 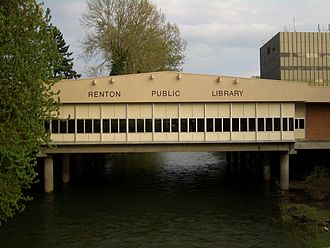 The southern region of the Issaquah School District includes the following schools in unincorporated Renton neighborhoods:

The northeastern region of the Kent School District includes the following schools in unincorporated Renton neighborhoods:

The northern region of the Tahoma School District includes schools that serve Renton but are located in Maple Valley and surrounding areas:

Our exclusive Local Market Research helps you make more informed decisions. Each week we publish market updates for Renton. You can see the latest trends in pricing, affordability, supply and demand. We invest in this research so our clients always have the latest insights to make the best decisions with confidence. Below are the latest home pricing trends for Renton based on zip code 98057. 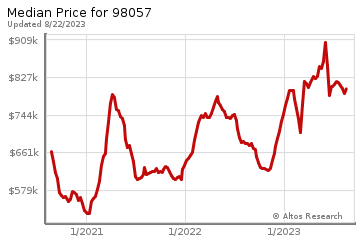 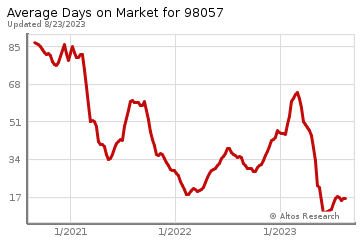 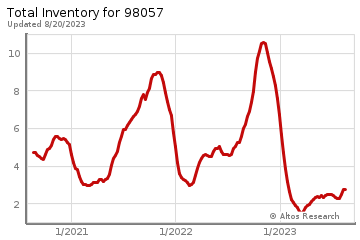 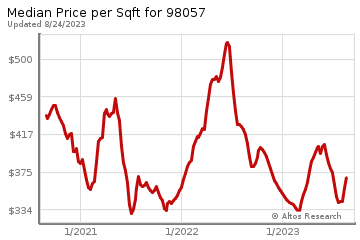 Back to All Renton Homes For Sale