Waterfront homes make up a large percentage of the luxury real estate in Greater Seattle.  Sammamish and other nearby cities will often have waterfront homes available in a variety of locations. Seattle-area waterfront properties include luxury lakefront homes on Lake Washington, Puget Sound waterfront estates, and floating homes and houseboats on Lake Union.

Sammamish is a recently-incorporated city on Seattle's Eastside and a highly-coveted location. Ranked as one of the best places to live in the U.S. by CNN Money, Sammamish has great schools, recreation, and a beautiful landscape. The city's 46,000 residents voted to incorporate in 1999, creating its name from its long shoreline on Lake Sammamish. Two other lakes of note in Sammamish are Beaver Lake and Pine Lake, and some of the area's most luxurious waterfront homes can be found on Sammamish's shorelines. Served by both Lake Washington School District and Issaquah School District, Sammamish also has a private option with Eastside Catholic School.

Sammamish (/səˈmæmɪʃ/) is a city in King County, Washington, United States. The population was 45,780 at the 2010 census and an estimated 65,892 in 2019. Located on a plateau, the city is bordered by Lake Sammamish to the west and the Snoqualmie Valley to the east. 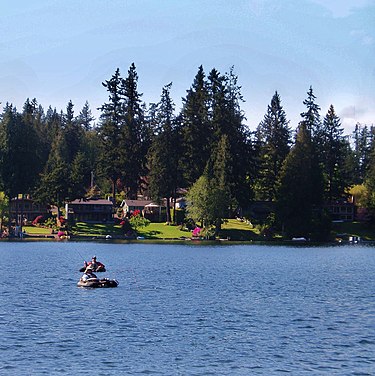 The Sammamish Plateau was part of unincorporated King County for most of its recorded history. The first settlers arrived in the late 19th century and established a trio of resorts by the 1930s. The plateau remained a mostly rural area until suburban homes, shopping centers, and schools were built in the 1970s and 1980s. A vote in 1991 to join neighboring Issaquah failed, as did a vote on incorporation the following year. A renewed movement to become a city, born of frustration with development policies set by the county government, met with voter approval in 1998. Sammamish was officially incorporated on August 31, 1999. The city annexed Klahanie on January 1, 2016.

The city is situated on the shores and hilly terrain east of Lake Sammamish. It is bordered to the south by Issaquah, to the northwest by Redmond, and to the west across Lake Sammamish by Bellevue. Beaver Lake and Pine Lake are the two biggest lakes in Sammamish.

The Sammamish City Council is elected by the community. Of the seven council members, two members are elected as Mayor and Deputy Mayor. Council meetings are held at City Hall, part of the Sammamish Commons, which is also the site of Sammamish Library, a branch of the King County Library System.

Sammamish does not have its own post office. Eastside Fire and Rescue is contracted to provide fire services. Sammamish contracts with the King County Sheriff's Office for police services. Deputies assigned to Sammamish wear city uniforms and drive patrol cars marked with the city logo.

Eastside Catholic School is a private school in the city.

Central Washington University is a public university that opened a Sammamish-based location on Sept. 20, 2017.

Sammamish is served by two major north–south roads: East Lake Sammamish Parkway and 228th Avenue. They connect to State Route 202 to the north, providing access to Redmond, and Interstate 90 to the south in Issaquah. A regional freeway, Interstate 605, has been proposed several times since the 1960s to run through Sammamish, but has not been built.

The King County government began construction of a 11-mile (18 km) bike trail on the east side of Lake Sammamish in 1998, replacing a disused railway.

Our exclusive Local Market Research helps you make more informed decisions. Each week we publish market updates for Sammamish. You can see the latest trends in pricing, affordability, supply and demand. We invest in this research so our clients always have the latest insights to make the best decisions with confidence. Below are the latest home pricing trends for Sammamish based on zip code 98074. 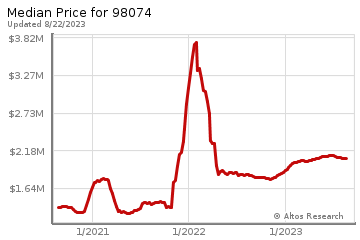 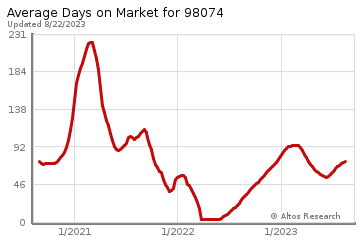 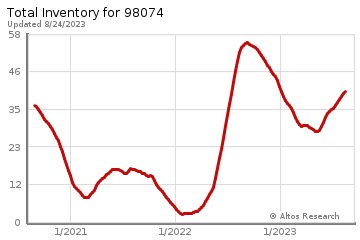 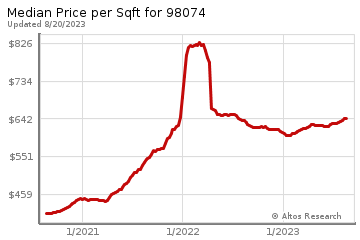 Back to All Sammamish Homes For Sale