Hillman City, originally its own town named after its founder Clarence Dayton Hillman, is an urban neighborhood in South Seattle. Just South of the bustling Columbia City, Hillman City has its own business district that is thriving, if not quite as broadly as Columbia City. Homes in Hillman City are affordable, and access to downtown Seattle is fairly quick.

You may want to hike/jog to improve your heart health. Check out Hitt's Hill Park at 5234 37th Ave S in northern Hillman City. Hitt's Hill Park offers hiking trails with a nice view of Lake Washington, downtown Seattle, and the Rainier Valley. For garden lovers, join as one of the P-Patch participants of Hillman City P-Patch Community Gardens. The community garden is at 4613 S Lucile St in the east of Rainier Ave S. If you want to bring your kids to a playfield, Brighton Playfield is available at 6000 39th Ave S next to Aki Kurose Middle School. Brighton Playfield has tennis courts, soccer fields, softball/baseball fields, basketball courts, volleyball courts, and a play area for kids. And if you're looking for a park with beach access, visit Martha Washington Park at 6612 57th Ave S in the southeast of Hillman City. Martha Washington Park is perfect for a picnic because it has water access with a great view of Lake Washington.

Many shops and restaurants are in the streets of Martin Luther King Jr Way S and Rainier Ave S. If you're planning to buy loaves of bread and pastries for your picnic party, check out some bakeries near the parks. There's Tony's Bakery at 6020 Martin Luther King Jr Way S in the west of Brighton Playfield, Q Bakery Sandwiches at 3818 S Graham St located in Empire Way Shopping Center, Sebhat Bakery & Grocery at 4270 S Mead St in the northeast of Brighton Playfield, and The Flour Box (theflourboxseattle.com) at 5520 Rainier Ave S in the west of Hillman City P-Patch Community Gardens. Homes in the Hillman City area have recently sold for between $275k and $2.59 million. To see today's real estate listings in Hillman City, Seattle, please click the link below.

Hillman City is a primarily residential neighborhood of southeast Seattle, Washington, located in the Rainier Valley and centered about a half mile south of the Columbia City neighborhood. It was annexed by Seattle in January 1907, along with the rest of the town of Southeast Seattle.

First homesteaded by M.D. Woodin in 1863, Hillman City as a community originated in the 1890s, with a stop on the new Rainier Valley Electric Railway as its nucleus. The neighborhood was named after Clarence Dayton "C.D." Hillman, who platted the area and built himself a house there just off of Rainier. Hillman was a real estate developer, and his business practices ranging into the fraudulent eventually landed him in a federal penitentiary. Hillman City resident Mikala Woodward, director of the Rainier Valley Historical Society, acknowledged at the time of the centennial of the neighborhood's annexation by Seattle, "We were named after a sleazy charlatan." Seattle pioneer Birdsey Wetmore resided in Hillman City until his death in 1909.

While never a serious challenger to Columbia City as the region's main business district, Hillman City did boast a real estate office, grocery, butcher, and hardware store, bakery, tile factory, movie theater, and for a time an opera house and a circular fountain at the intersection of Rainier and Orcas. Like most of the Rainier Valley, Hillman City declined after the mid-20th century; in the 1980s its perhaps best-known institution was the former grocery and butcher shop, which had become Hillman City Boxing Gym (the building is, as of 2011, Lee’s Martial Arts Academy, offering instruction in karate and taekwondo). In 1999, a Department of Neighborhoods study wrote that "Historic Hillman City… is commonly described by residents as deteriorating and depressed. However, with a near continuous facade of streetfront buildings and a modest pedestrian scale, Hillman City has the opportunity, many believe, to become an attractive neighborhood center." 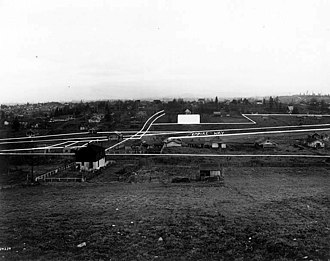 By 2007, the neighborhood was showing some signs of recovery, though still a mixed picture. The Hillman City Business Association worked to improve the quality of life in the neighborhood, by organizing community events, patrols, and litter cleanups.

In June 2013, a congregation and an arts collective leased a building on the northwest corner of Rainier and Orcas and an adjacent vacant lot, gutted the space, and, several months later, opened the Hillman City Collaboratory, a non-profit community center and co-working space with a mission to provide space and programs specifically designed to create community and equip change-makers.

In August 2013, the Seattle Weekly named Hillman City the "Best Up-and-Coming Neighborhood" in Seattle. Some worry, however, that the neighborhood may lose its identity as it changes.

In 2015, a group called Vision Hillman City held a series of roundtable discussions open to all neighbors and designed to identify neighborhood priorities, create plans for future action, and cultivate a shared neighborhood identity.

Our Hillman City market research helps you make more informed decisions about homes in South Seattle. Each week we publish market updates for Hillman City, in its 98108 zip code. You can see the latest trends in pricing, affordability, supply and demand. We invest in this research so our clients always have the latest insights to make the best decisions with confidence.