Lakewood Homes For Sale in Seattle

Lakewood is a small neighborhood in Southeast Seattle nestled between Seward Park and Columbia/Mt Baker. Not well known to many, this 20-block patch has great access to the local waterfront parks as well as the shopping and entertainment district in Columbia City. Many homes in Lakewood have East-facing views of Lake Washington and the Cascade Mountains.

The stores available in the Lakewood neighborhood are Noah's Grocery (206-725-4267) at 4700 50th Ave S in the north of Lakewood Playground, Both Ways Cafe (Breakfast restaurant, bothwayscafe.com) at 4922 S Genesee St located near Adams Street Boat Ramp, Caffe Vita (Coffee shop, caffevita.com) at 5028 Wilson Ave S in the south of Lakewood Park, and Bent Burgers (Hamburger restaurant, bentburgers.com) at 5100 S Dawson St. Residents in Lakewood visit the nearby shops and restaurants located on Rainier Ave S (south of Columbia Park). Homes in the Lakewood area have recently sold for between $309k and $1.95 million. To see today's real estate listings in Lakewood, Seattle, please click the link below.

The map can show you the commute right now, or you can select "More options", and in the popup new window, click the "Leave Now" option to see what the commute is at any time of day you choose.

The Lakewood neighborhood along southeast Seattle's Lake Washington shoreline is located east of Genesee Park and northwest of Seward Park (it is often considered part of the Seward Park neighborhood). The area was originally a peninsula formed by a long inlet called Wetmore Slough -- the present location of Genesee Park -- that extended more than one-half mile south from the lakeshore and turned west toward Columbia City. Not until a bridge carried Lake Washington Boulevard S across the mouth of the slough in 1912 and a trolley line opened on S Genesee Street did the community gain good communication with the rest of the city. Lowering of the lake due to construction of the Lake Washington Ship Canal in 1916 largely drained the slough. The land where the slough had been was used for some years as a dump. The Stanley S. Sayres Memorial Hydroplane Pits were developed in 1957 at the north end of the former slough, and a decade later the remaining slough area became Genesee Park and Playfield. In addition to its park, Lakewood is a mix of large homes close to the lakeshore and more modest dwellings inland.

Lakewood's and Seward Park's first residents were Native Americans of the Duwamish Tribe who lived along the shore of Lake Washington. The thick forest sheltered game and provided the cedar trees that the Duwamish used for their longhouses, but the tribe does not appear to have established a permanent village there. During summer months, families erected shelters woven from cattails on the shore of the lake where they caught fish and dug roots. During the winter, they lived in elaborate longhouses on Pritchard Island or at other settlements around the lake. 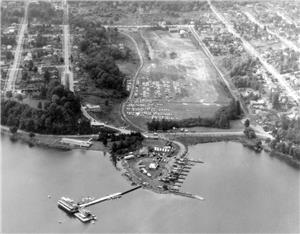 The slough was named for Seymour Wetmore, who had come to Seattle in 1857. Wetmore founded a tannery and shoe factory, but those were unsuccessful. He moved to the Rainier Valley and homesteaded there. In 1872, he trapped a cougar that was killing his sheep and the animal was sold as a curiosity. Wetmore's son Frank purchased property on the west side of the slough.

John S. Maggs filed a claim along the lake shore and proved it up, gaining title. In the 1870s, Hewett Lee built a sawmill in a small cove on land owned by Charles Waters, who developed Somerville to the southeast. Guy Phinney (1852-1893) bought all the land in 1883 and he platted it as Maynard's Addition with streets laid out and named. But occupation of the ridge between the slough and the lake was slow because of limited transportation. In 1890, Columbia City was founded around a sawmill located near the head of the ravine that led to Wetmore Slough. An 1894 map shows one road into the area "poor or infrequently traveled" (McKee).

The Port of Columbia City

The slough and ravine caught the eyes of dreamers who saw a seaport. Fresh water was attractive to ship owners because it killed the saltwater organisms that attacked wooden hulls. There was no deep water connection between Elliott Bay and Lake Washington so two major ship-canal schemes went forward in the 1890s. One plan involved cutting through Beacon Hill to Lake Washington, making Wetmore Slough, which reached almost to Columbia City, the logical location for an inland seaport. The Beacon Hill scheme progressed only a short distance before those who favored a north canal convinced the city council in 1904 to cut off the water that was needed to excavate a south canal (Hynding, 86).

The competing north canal route prevailed, opening in 1917 as the Lake Washington Ship Canal, which connected salt water at Ballard with Lake Washington via Lake Union and the Fremont and Montlake cuts. After the cuts were opened in 1916, the water level of the lake dropped nine feet, draining much of Wetmore Slough. 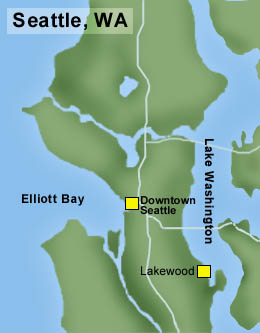 In 1903, C. B. Dodge replatted the area and called it Lakewood. He filed his plat plan with the clerk of Columbia City, which incorporated as an independent city in 1893 and had boomed since the construction of the Seattle, Renton and Southern Railway through the Rainier Valley. In 1907, Lakewood and Columbia City were annexed into the city of Seattle. The neighborhood was still somewhat remote from Seattle. Travelers took the trolley to Columbia City and then walked a mile up Genesee Street toward the lake.

Residents of Lakewood yearned to enjoy the benefits of city life. In the spring of 1910, in the parlor of A. G. Corbitt, they organized what would later become the Lakewood Community Club. The club's purpose as stated in 1914 was "To promote by education and active cooperation better sanitary and symmetrical conditions in all public and private buildings and grounds, to cultivate a higher public spirit and better social order." One of the first items of business was to get the unpaved streets graded. Developers had laid out streets that followed the contours of the land and some thoroughfares were too steep for traffic.

The club lobbied for a sidewalk on S Genesee Street. The city council approved a two-plank walkway, but this was too narrow to accommodate baby carriages. The club kept working on the council until the city approved a three-plank walkway. The club also successfully worked for an extension of the Seattle, Renton and Southern streetcar line up Genesee Street and across the slough to provide a connection to main line on Rainier Avenue S. This feeder line was dubbed the "Toonerville Trolley" and "Bouncing Betsy." In 1924, the area finally got graded streets and concrete sidewalks. 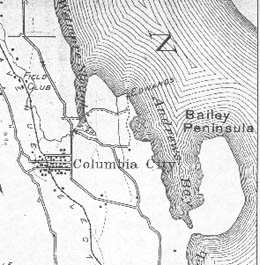 In 1908, the Olmsted Brothers landscape architecture firm proposed parks for the newly annexed neighborhoods of Seattle. They picked the headland of what was then the peninsula formed by Wetmore Slough as a park location, to be connected with the other parks in the city by a boulevard system. No park was built there for years, but Lake Washington Boulevard was eventually completed along the lake shore and crossed the mouth of the slough on a wood-pile trestle.

The draining of Wetmore Slough following the 1916 lowering of Lake Washington left behind a large wet area ideal for the incubation of mosquitoes. In 1928, the Rainier District Real Estate Association proposed dredging a 200-foot-wide, 2,000-foot-long canal up the slough with the hope of making Columbia City into "the best small boat haven on Lake Washington" ("Improvement Clubs ..."), but nothing came of the plan.

In 1937, the old wood-pile trestle that carried Lake Washington Boulevard over the slough's mouth was replaced with fill and by 1943 the slough was being used as a sanitary landfill. Rats and seagulls replaced wild ducks and geese, to the great annoyance of the neighbors. Dumping ended in 1967 or possibly 1968 (there is no official date for the closing and various sources provide different dates), but for years the landfill polluted the lake with leachate. 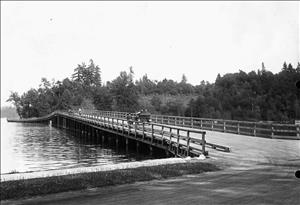 In 1957, the city developed a pit area for hydroplane races near the north tip of the peninsula. The pits were named for hydroplane driver Stanley S. Sayres (1896-1956) who was credited with bringing the Gold Cup hydroplane races to Seattle. The fill area to the south served as a parking lot during races in August, but was unstable for other uses. Ohlers Island, along the lakeshore to the southeast, became a small boat marina.

In 1968, Forward Thrust bonds allowed completion of long-delayed plans to develop the former slough area as Genesee Park and Playfield. The old garbage dump was stabilized to allow the construction of grassy areas and recreation facilities, but methane from the decaying garbage still comes to the surface.

The Lakewood neighborhood east of the park is a mix of large homes close to the lakeshore and more modest dwellings inland. In about 1985, the Lakewood Community Club changed its name to Lakewood-Seward Park Community Club to embrace the entire area east of 42nd Avenue S extending south beyond the Seward Park peninsula all the way to about S Othello Street. 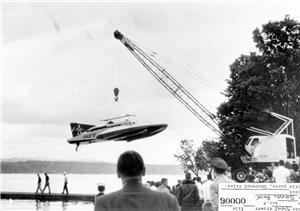 Our Lakewood market research helps you make more informed decisions about homes in South Seattle. Each week we publish market updates for Lakewood, in its 98118 zip code. You can see the latest trends in pricing, affordability, supply and demand. We invest in this research so our clients always have the latest insights to make the best decisions with confidence.