Water View homes make up a large percentage of the luxury real estate in Greater Seattle.  Vashon Island and other nearby cities will often have water view homes available in a variety of locations. Seattle-area water view properties include luxury lakefront homes on Lake Washington, Puget Sound water view estates, and floating homes and houseboats on Lake Union.

Vashon Island is located just a short ferry ride from West Seattle, across the Fauntleroy and downtown ferry routes. Vashon is a fairly rural island despite its large land mass, with 37 square miles of land and just 11,000 residents. Sometimes referred to as Vashon-Maury Island for its Siamese island appendage, the Vashon and Maury area are known for their artists and farmers, while a large number of residents commute to Tacoma and Seattle for more traditional work.

Vashon is a census-designated place (CDP) in King County, Washington, United States. It covers an island alternately called Vashon Island or Vashon-Maury Island, the largest island in Puget Sound south of Admiralty Inlet. The population was 10,624 at the 2010 census and the size is 36.9 square miles (95.6 km2).

The island is connected to West Seattle and the Kitsap Peninsula via the Washington State Ferries system. The island has resisted the construction of a fixed bridge to preserve its relative isolation and rural character. Vashon Island is also known for its annual strawberry festival, sheepdog trials, and agriculture. 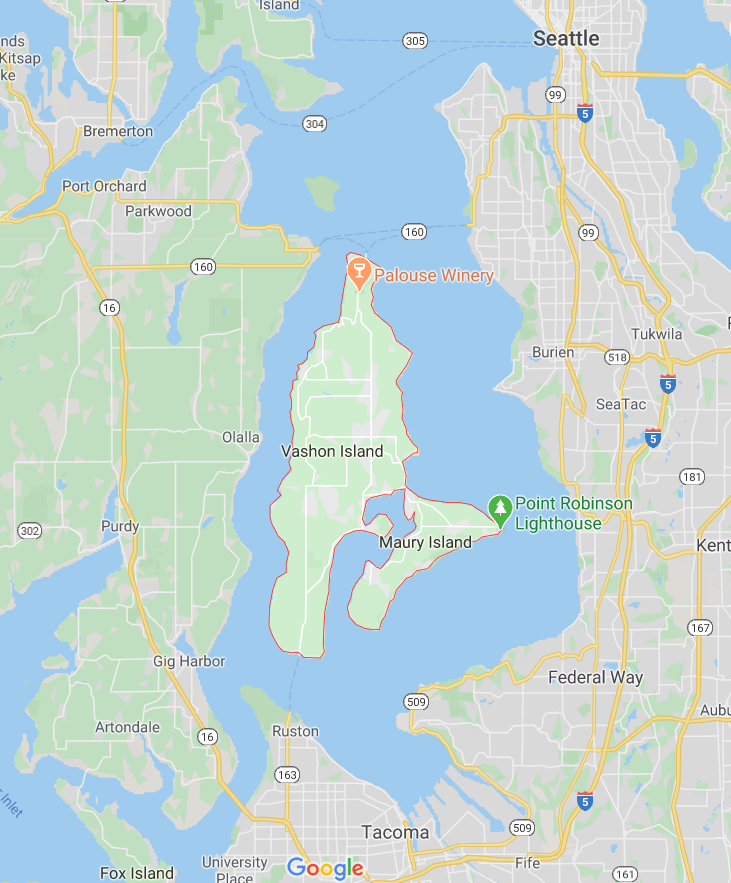 Vashon Island sits in the midpoint of southern Puget Sound, between Seattle and Tacoma, Washington. The island lies along the 700-mile (1,130 km) fault line known as the Cascadia Subduction Zone, which last saw a major rupture in 1700, but the potential of the zone could cause one of the worst natural disasters in the history of North America.

Up until the late 1700s, Vashon and Maury Islands were inhabited solely by American Indians, and there is evidence of human activity on Vashon Island dating back 10,000 to 12,000 years. Historical data from the era when the first Native Americans settled Vashon–Maury Island is limited. Some of the Native peoples known to have lived on Vashon Island were the Marpole culture from about 7,000 years ago, the Salish about 1,000 years ago, and the S'Homamish starting about 500 years ago, the latter of which established 5 known major village sites. The Tulalip Indians is another tribe that populated the villages along the shores of both islands. Fishing was abundant in the cold saltwater of the central Puget Sound basin, helping Native American tribes to thrive. Moreover, the many waterways and inlets provided easy travel by way of canoe.

The first non–American Indian to explore and the first to chart this island was Captain George Vancouver, during his surveys of the Puget Sound area with the British Royal Navy. The island was named on May 28, 1792, by Vancouver after his friend James Vashon of the Royal Navy. Starting in 1824, different explorer and settler groups stayed on Vashon Island.

Maury Island, immediately to the southeast of Vashon, was named in 1841 by then Lt. Charles Wilkes in honor of William Lewis Maury, an officer in the United States Exploring Expedition. Maury was naturally separated from Vashon by a narrow passage, until local landowners decided to build an earth bridge, or isthmus, linking them together in 1916, thus creating the hamlet of Portage. Therefore, the two-piece isle was renamed Vashon-Maury Island. Between the two sections, it covers nearly 37 square miles (96 km2).

The first logging on the island began in 1852. By 1855–1856, the S'Homamish people were interned at Fox Island. European-Americans settled Vashon Island between 1865 and 1890. During that time the main economies on the island were fishing and logging.

In 1890, Japanese Americans started growing strawberries for sale. Denichiro Mukai came to the island in 1910 and became renown for barreling fresh strawberries using a special method that concentrated flavor and moisture in the fruit and permitted long distance shipping. In time, Mukai designed and built his own home and elaborate garden and then constructed a sturdy timber framed barreling plant. During the peak years, ice cream, jam and preserve makers across the West were customers of Mukai, relishing the oak barrels for their lingering flavor and mythologizing about the island of strawberry fields. This became an important part of the island economy during the next 50 years, until the Japanese American population was forcibly relocated into internment camps as a response to Japanese/American tension caused by WWII.

In 1892, Vashon College opened in the Burton section of Vashon. During its operation, it was one of the leading colleges in the area. It burned down in 1910. 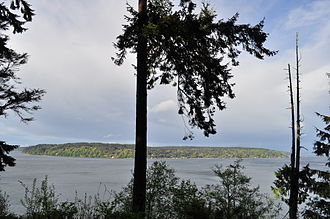 This region experiences warm (but not hot) and dry summers, with no average monthly temperatures above 71.6 °F (22.0 °C). According to the Köppen Climate Classification system, Vashon has a warm-summer Mediterranean climate, abbreviated "Csb" on climate maps.

The economy of Vashon Island is heavily based on residents commuting to Seattle and Tacoma.

While orchards and strawberry farms formerly played a major role in the Vashon economy, the pressures of suburban residential development have all but eliminated any major commercial agriculture on the island. Many small farms operate on the island, providing locals with fresh organic produce, milk, and eggs. Despite the changes, the island continues to observe the tradition of holding a Strawberry Festival every July. In certain areas like Dockton, a significant amount of private property was occupied and subsequently seized from Japanese-American citizens who farmed strawberries on that land until World War II, when they were moved to internment camps away from the island.

Local orchards and wineries are established on the island, with some focusing on developing perry, an alcoholic beverage derived from pear juice instead of grapes. There are at least three wineries that produce 100% locally produced wines and other alcoholic-based beverages. 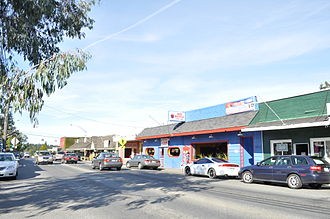 Vashon has lost two of its major industrial employers: K2 Sports moved its manufacturing to China, and the Seattle's Best Coffee roastery operation was closed shortly after SBC was bought by Starbucks. Currently, the largest manufacturer on Vashon is Pacific Research Laboratories, locally referred to as "The Bone Factory".

In 2014 it was reported that the company Edipure was to purchase the old K2 ski plant to manufacture more than 60 marijuana-based snacks including crackers, candy and gummy bears.

There are no bridges to Vashon Island, so all access to the island is by sea or by air. Most travel on and off the island is on the Washington State Ferry system.

Vashon Municipal Airport is on the northern half of the island. There is no regularly scheduled air service to the airport.

King County Metro provides bus service down the length of the island daily. During peak commute times on weekdays, the buses drive on to the ferry to Seattle. On September 10, 2016, on-island Sunday service returned to Vashon. Route 118 provides islanders with Sunday service for the first time in many years, mirroring Saturday schedules and helping riders connect with both ferry terminals and other destinations in between.

The southern terminus of the Vashon Highway is the Tahlequah Ferry Terminal in the Tahlequah neighborhood, connected to the Point Defiance neighborhood of Tacoma by the Point Defiance–Tahlequah ferry. The northern terminus of the Vashon Highway is the Heights Dock at Point Vashon, serving the state ferry docks at Southworth, and Fauntleroy in West Seattle. Passenger-only service from Heights Dock to Colman Dock in Downtown Seattle is provided by the King County Ferry District, with three sailings in each direction during the morning and afternoon, Monday through Friday.

In 2016 it was reported that the medical clinic on the island had closed after CHI Franciscan Health had left the clinic, claiming financial concerns. Another provider, the non-profit Neighborcare Health, pledged to open a new clinic later in the year, alleviating the issue of transporting patients to hospitals off the island via the ferry, which can take upwards of three hours.

Many of those who live on the island choose not to vaccinate their children due to personal beliefs and concerns, with more than 98% that don't vaccinate citing "Personal" on the paper work instead of "Religious" or "Medical". The divide between beliefs has caused many arguments and resentment, with at least two separate Facebook pages, one now marked private, to share information and discuss with one another. It was reported in 2015 that 23.1% of kindergartners in the Vashon Island School District legally opted out of vaccinations against diphtheria and tetanus, whooping cough, measles, mumps, rubella, polio, varicella, and hepatitis B. The number at the time was five times the state average.

Due to expanded access to vaccines, media coverage of the measles outbreaks, and education about the benefits of vaccination, the vaccine rate for the Vashon Island School District has risen over the years, even though it is still one of the lowest in the United States. The district's rates of students fully immunized has risen 31% in the past six years, from only 56% to 74% in the 2017-2018 school year, although it is below the 95% target rate for the rest of the country. In 2019 it was reported that some 11.6% of families on the island had chosen not to vaccinate their children, and some claim that those who do not vaccinate their children and their children are excluded from gatherings or openly mocked.

The annual studio tour was created in the late 1970s by some of the potters who lived on the island. The group was rebranded in February 2018 as the Vashon Island Visual Artists, and they applied for non-profit status in 2015. The group now operates semi-annual tours of studios of local artists, classes, workshops, salons, exhibits, and social activities for artists, with membership around 300.

The island is home to a choral group established in 1989 under the name Island Singers, and now known as the Vashon Island Chorale.

The island is home to the Vashon Island Rowing Club, which participates in many events such as the Opening Day celebrations on Seattle's Montlake Cut.

The Vashon Sheepdog Classic occurs each year at the Misty Isle Farms, with local food and merchandise vendors, with all profits going to area nonprofits. The trials are completed by a team composed of a dog and its handler who are released into a shedding ring and work to herd the sheep into specific areas.

Vashon Island has a number of buildings and sites that are listed on the King County Historic Register: 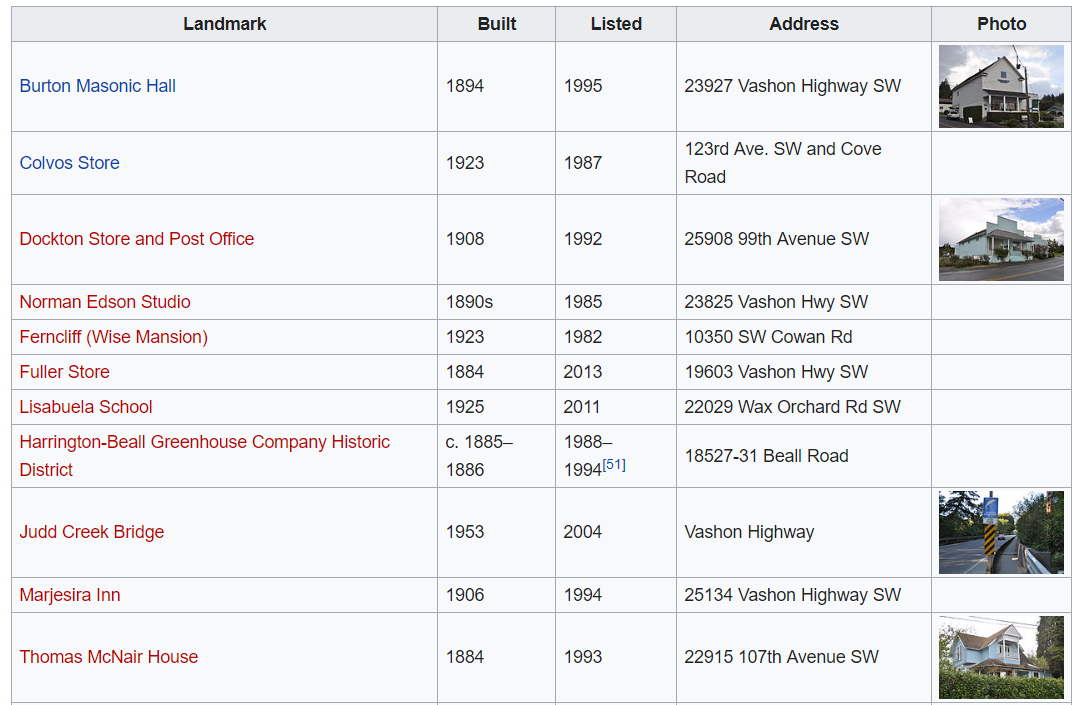 Our exclusive Local Market Research helps you make more informed decisions. Each week we publish market updates for Vashon Island. You can see the latest trends in pricing, affordability, supply and demand. We invest in this research so our clients always have the latest insights to make the best decisions with confidence. Below are the latest home pricing trends for Vashon Island based on zip code 98070. 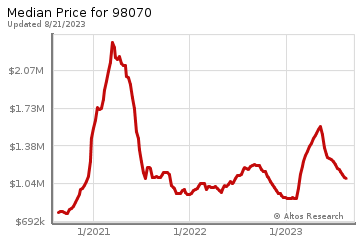 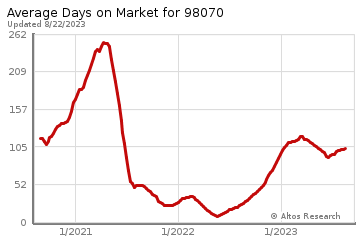 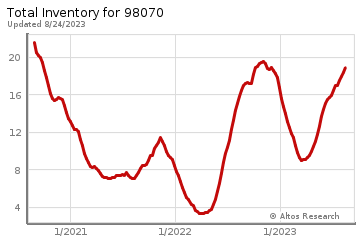 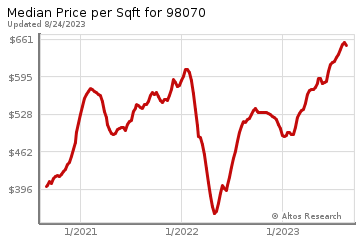 Back to All Vashon Island Homes For Sale