Contact Brian Wiegand, our managing broker, with any questions you have about waterfront homes, houseboats, floating homes, and waterfront condos at 206-431-5900. 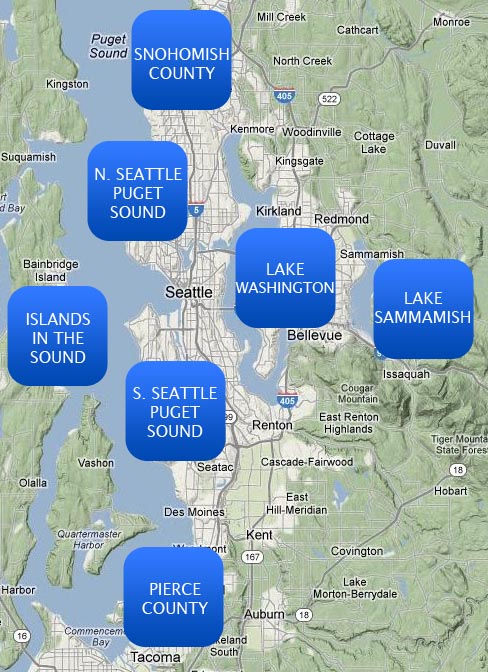 Lake Washington is the Seattle area's largest lake, as well as its most popular fresh water location for boating, fishing, and water sports.  Many of Seattle's most exclusive waterfront neighborhoods reside on Lake Washington, including Medina and Mercer Island.  Executives from Microsoft, Amazon, Costco, Starbucks, Nintendo, Paccar, and Expediters International live on Lake Washington, as well as many professional athletes from the Seattle Seahawks, Seattle Mariners, and former Seattle SuperSonics.  There are also some neighborhoods on the lake with less-expensive homes at more moderate prices.

Puget Sound is the saltwater inlet from the Pacific Ocean which passes Seattle and heads southward to Olympia.  West Seattle, the North Seattle shoreline, and many islands have residences along the Sound.  This is the closest feel to an ocean beach that you'll find in the Seattle area.

Homes on Lake Sammamish range from moderate to luxurious.  This large lake has plenty of space for boating and fishing, and is surrounded by residential neighborhoods.  The water is calm, and the lake naturally drains out to Lake Washington, keeping the water level within a reasonable range throughout the year and allowing for docks on many properties.  With Marymoor Park on the North end and Lake Sammamish State Park on the South end, Lake Sammamish is a favorite recreation and relaxation spot for Eastside residents.

Lake Union is just North of Downtown Seattle.  It is surrounded mostly by commercial enterprises, floating homes, houseboats, and vessel marinas.  Houseboats can be simple barges with a cabin on top, while floating homes are often million-plus dollar custom homes built on high-end floats with permanent utility hookups.

Some of Greater Seattle's most popular locations for waterfront condos:

While there are not always waterfront homes available for sale in every neighborhood of Seattle, check back often as new listings will appear on our site daily.  If you can't find the waterfront home you're looking for, just Contact Us and we'll do the searching for you.

Classic Union Hill Custom // Set upon bucolic grounds this gracious 5,000sf+ custom in the heart of Redmond combines the very best in location with unparalleled privacy, ...

Welcome home to the casual elegance of this 4370 SQFT Log Home nestled amongst the trees. Only minutes to town and I-90, this private estate rests on a shy 10 acres overl...

A waterfront lifestyle in DT Kirkland where fun intersects with functionality! Just a couple of blocks to top restaurants then relax in a front row living rm seat for the...

Beautiful, like new (2020) gated rambler, on just shy of 6 acres! Over $100k in improvements. Minutes from downtown Granite Falls, the possibilities for this piece of hea...

One of a kind waterfront estate on 3.45 acres with 187' of southern exposure along Hales Passage. The first floor of this 4,946 SF home features a living room, kitchen, ...

If you want an exceptional,one-of-a-kind of home, this timber frame craftsman has been designed w/the highest level of attention-to-detail. There are 2 fast ferries to do...

Breath in the quiet freshness of 5.4 acres of beauty. A sense of permanence emanates from this 1998 remodeled and expanded custom home and gorgeous landscape set seamless...

NEW PRICE! Once in a lifetime opportunity, own a masterpiece 5 BR 3.5 BA home that reflects the park-like setting around it. Step on the property and there's a feeling of...

Unparalleled opportunity to own your own piece of heaven. One of a kind Snag Island Lake Tapps property. Shy 5 acres! Own your very own private island. Breathtaking view...

A rare opportunity to purchase one of the last grand lots on Lake Washington. This private 90,608 SqFt waterfront playground provides both lakeside seclusion and the puls...

Enjoy the best of both worlds with this secluded 72,969 SqFt lakeside playground and 15 minute access to both downtown Seattle and Bellevue. 192' of low bank shorelin...

Set eyes on this 3,000 sq ft home on a subdividable 2.4 acres, surrounded by scenery in downtown Sumner. Endless options! Rent or flip the house while you develop 4-5 mor...

The iconic Tacoma Country & Golf Club is situated on the shores of American Lake and is home to this luxury waterfront condo w/ the Golf Course right out your door. A un...

29 acres on Jim Creek including a 3 bedroom 2 bath manufactured home 1440 sqft that was recently updated and produces $1,000 month-to-month lease. Preliminary plat to sub...

3 homes that were condominiumized on 6.75 acres all rented month to month for a total of 5100/month. Plus an additional manufactured Home Producing $1,000 on 29 acres wit...

29 acres on Jim Creek including a 3 bedroom 2 bath manufactured home 1440 sqft that was recently updated and produces $1,000 month-to-month lease. Preliminary plat to sub...

This Lake Stevens home with 118' of waterfront property, your own boat launch, and incredible views of the lake and mountains is a must see! White silica sand beaches wit...

Sellers have moved on and are ready to sell! Breathtaking views of Puget Sound, shipping lanes, and mountains. 80' med bank with stairs to private beach. large open gourm...

Crossing the Fox Island bridge with Mt. Rainier to the left and the Olympic Mountains to the right, everyday concerns evaporate as you approach your Pacific Northwest san...

A rare development opportunity on Medina’s Gold Coast. Bring your vision and your waterfront dreams to Evergreen Point Road. The views of Lake Washington, Olympic Mountai...

Iconic Mukilteo View Estate. Once inside the gates of this spectacular residence, park your cars in one of the 6 garages and enter through the dramatic grand entry with c...

Courtesy of Windermere RE North, Inc.

Amazing opportunity to purchase property right along the Cedar River! This property is close to Boeing and Downtown Renton with easy access to I-405 (to Seattle/Bellevue)...

Paradise Found! Located on the glorious Hood Canal, 178 ft of walk-out, NO Bank, sand beach. A rare & unique estate property offered for the 1st time in over half a centu...

A great looking 4 bedroom 2.75 bathroom home on a large 4.7 acre lot available in beautiful Port Orchard. Some highlights include high vaulted ceilings over an open livin... 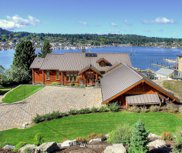 This new construction home is the epitome of luxury living in Bellevue. Three spacious levels provide a floor plan that’s perfect for entertaining, with 6 bedrooms and 5....

Welcome Home to the charmed life in Medina and a quiet slice of paradise surrounded by greenery, park like grounds, and serene creek frontage. Completely refreshed 4 bedr...

This one-of-a-kind property features a winding driveway that welcomes you to a secluded sanctuary on nearly an acre. Situated just minutes from Tacoma Country & Golf Club...

Opportunity is knocking... Answer the door! Looking for that perfect piece of land to build your estate? Want privacy & river front? Maybe room to explore? See this prope...

Once in a lifetime opportunity (changed hands 4x since 1880) historic home on acreage of Historic Registries w/rich history built in 1880 & an addition in 1916. Surrounde...

AMERICAN LAKE WATERFRONT Estate. Rare find, last sold 40 years ago. Drive down the private road into your own park. Fully fenced, 5.65 acres with 190'(+/-) of waterfron...

The Queen of Lake Union // Once-in-a-generation opportunity -- In the heart of the iconic Femont neighborhood, Seattle's "Aurora" houseboat offers 4,800sf of unparallele...

Courtesy of Better Homes and Gardens RE PC

Listing courtesy of Better Homes and Gardens RE PC.

Beach house with approximately 180 feet of South facing prime Puget Sound waterfront. Home is over 2,000 square feet with three bedrooms and three and a half baths, stone...

Escape the ordinary for a dream location on Lake Sammamish. Private, gated and secure. Sited North on a street to water lot that mystifies. Lush mature landscaping, sculp...

Escape the ordinary for a dream location on Lake Sammamish. Private, gated and secure. Sited North on a street to water lot that mystifies. Lush mature landscaping, sculp...

The most serene and idyllic waterfront setting amongst the trees. Welcome to beautiful Beaver Lake in Sammamish. Opportunity to build a custom home on a once in a lifetim...

142 Acres of six separate tax parcels of prime farmland, some of the best soils in the State. Currently being leased to a local farmer producing berries and vegetables th...

Offered to the connoisseur of global luxury properties, this majestic Pacific Northwest estate is a once-in-a-lifetime opportunity. Nestled on 246 feet of pristine waterf...

LAKE LIFE AWAITS YOU. Rare opportunity to own a large waterfront land parcel on pristine waters of Gravelly Lake includes more than 1.5 acres with 53' feet of lakefront. ...

Very rare 112 foot sandy beach no bank Puget Sound waterfront luxury home. Properties like this do not come on the market because no one ever leaves. Private gated commun...

Secluded on 9+ acres, Westwold is one of Woodway’s most significant estates. Custom-built by Woodway founder David Whitcomb Sr, inspired by a Cotswold manor. Meticulously...

Welcome to a magnificent waterfront home in Redondo Beach . Luxury home situated in a private setting & on over an acre. It has spectacular views of Olympic mountains, Pu... 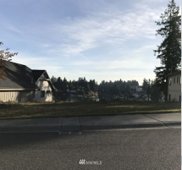 Only handful of waterfront building sites remaining in Fairweather Cove Estates! This gorgeous site, is located on Lake Tapps. This is your change to build your dream hom...

90+/- acres, rare chance to own one of the largest land acreage presently offered for sale in Gig Harbor-Peninsula area. Land consists of four parcels, (1) 10 acre and (2...

Courtesy of Land and Wildlife LLC

Over 18 acres of Interstate 5 Frontage for Sale across from Tulalip Resort & Casino and Seattle Premium Outlet Mall! Unique piece of property with no comparison. Mature t...

A "Once In A Lifetime Opportunity"! 64+ beautiful acres, one of the largest undeveloped tracts in KC, with something for everyone! Quiet privacy, mountain views,(even the...

Come see this beautiful shy 80 acre parcel in Bonney Lake. It offers many uses and is currently zoned as Designated Forest Land. 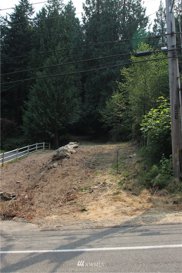 Bellevue-Cougar Mountain 7+ Acre Partially Cleared Site with Bellevue Utilities, partial peek a views, Issaquah Schools, Ready for your Home plans! There are a Couple of ...

Opportunity awaits! This is your chance to build on just under 40 acres in the Cascade Industrial Center. 11.59 acres is FLAT and zoned business park. 28.41 acres is zone...

Panoramic view of Puget Sound and the Olympic mountains. Opportunity to build your lucky dream home! One of the last great waterfront lots in the Edmonds area. Located in...

The database information herein is provided from and copyrighted by the Northwest Multiple Listing Service (NWMLS). NWMLS data may not be reproduced or redistributed and is only for people viewing this site. All information provided is deemed reliable but is not guaranteed and should be independently verified. All properties are subject to prior sale or withdrawal. All rights are reserved by copyright.
Like or Share
Loading likes...